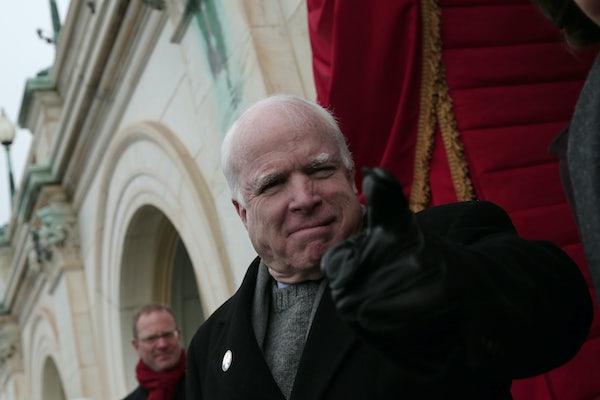 John McCain is spitting mad about Trump’s Russia policy, but he’s all bark and no bite.

President Donald Trump is scheduled to talk to Russian autocrat Vladimir Putin, and Arizona Senator John McCain has issued a righteous statement condemning any moves to lift sanctions (which Trump is considering):

President Donald Trump’s call with Vladimir Putin is scheduled to take place amid widespread speculation that the White House is considering lifting sanctions against Russia. For the sake of America’s national security and that of our allies, I hope President Trump will put an end to this speculation and reject such a reckless course. If he does not, I will work with my colleagues to codify sanctions against Russia into law....

Each of our last three presidents had high hopes for building a partnership with the Russian government. Each attempt failed, not for lack of good faith and effort on the U.S. side, but because Putin wants to be our enemy. He needs us as his enemy. He will never be our partner, including in fighting ISIL. He believes that strengthening Russia means weakening America. President Trump should remember this when he speaks to Vladimir Putin. He should remember that the man on the other end of the line is a murderer and a thug who seeks to undermine American national security interests at every turn. For our commander-in-chief to think otherwise would be naïve and dangerous.

As strongly worded as McCain’s statement is, it carries little force. He has so far shown no willingness to stand up to Trump in any meaningful way. For instance, McCain is going to vote to confirm Secretary of State nominee Rex Tillerson, the recipient of an Order of Friendship award from Putin. Will McCain carry through his threat of trying to pass a law to codify anti-Russian sanctions? To paraphrase Ronald Reagan, our assumption should be: “Don’t trust until you can verify.”