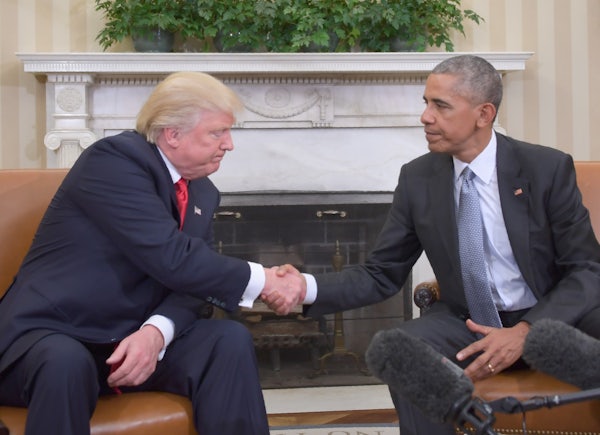 It only took ten days for President Obama to speak out against President Trump.

The Trump administration has defended its executive order restricting travel from seven Muslim-majority countries by making three arguments. They claim that it makes America safer, even though there is no evidence that it does. They underplay the number of people affected by the order—emphasizing that around 100 were detained, when its effects are more far-reaching. And they claim that there is precedent—that President Obama restricted travel from Iraq in 2011 and that the seven countries were first identified by Obama and Congress as being sources of terrorism in 2015. On Sunday afternoon, after protests raged at airports across the country and a federal judge blocked the order from being implemented, Trump released this statement:

“My policy is similar to what President Obama did in 2011 when he banned visas for refugees from Iraq for six months. The seven countries named in the Executive Order are the same countries previously identified by the Obama administration as sources of terror.”

On Monday, Obama released a statement—his first since Trump’s inauguration—to speak out against the travel ban. “With regard to comparisons to President Obama’s foreign policy decisions, as we’ve heard before, the President fundamentally disagrees with the notion of discriminating against individuals because of their faith or religion,” Obama’s spokesman said. He’s right. There are serious differences between what Obama did in 2011 and what Trump is doing now—the Obama administration did not ban visas; issued the order in response to a specific threat; and consulted federal agencies prior to issuing the order. Obama promised to speak out “where I think our core values may be at stake.” So far, he’s keeping that promise.