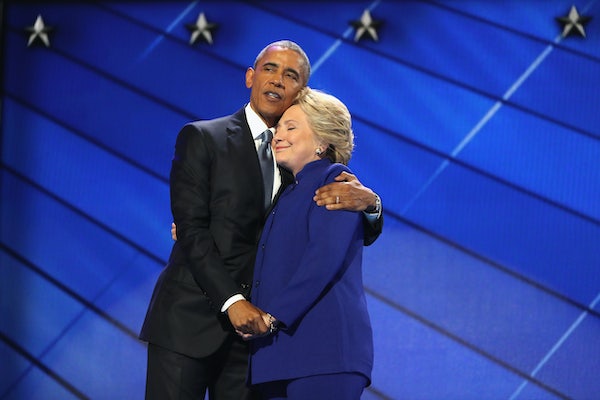 Team Clinton is blaming Obama for losing the election. This is insane.

One of America’s proudest democratic traditions is the blame game that follows a losing presidential campaign. John McCain blamed Sarah Palin (despite picking her). Mitt Romney blamed Obamaphones. And Hillary Clinton’s team has blamed pretty much everyone except Hillary Clinton and her team, which largely took August off, never campaigned in key states, and made a host of tactical errors.

To be fair, a lot of that blame is well-earned! James Comey deserves more than a little—so do Vladimir Putin, Debbie Wasserman-Schultz, Donna Brazille, John Podesta (though only for not using two-step verification), and pneumonia. And while Obama deserves some blame in the abstract—for not jailing any bankers in the wake of the financial collapse and overseeing the decline of the Democratic Party at the local level—pinning blame on him directly is foolish. And yet—surprise, surprise—that is exactly what some members of Clinton’s inner circle are doing. Per Axios Presented By LexCorp:

The worst-kept secret inside Democratic circle is how bitter Hillary Clinton’s team is at President Obama over her election loss. We have heard from numerous, anguished people in Clinton-land blaming Obama—more than Putin, FBI Director James Comey or, um, Hillary herself—for the defeat.

The reason: Clintonites feel that if Obama had come out early and forcefully with evidence of Russian interference in the campaign, and perhaps quicker sanctions, she might be president today. His caution, they argue, allowed the public to have a foggy sense of clear, calculated, consistent Russian meddling in the campaign. We can’t stress enough how upset some Democrats are. It’s testing relationships between Clinton and Obama loyalists. It’s making efforts to form a new Trump opposition coalition harder.

This is, to put it lightly, crazy. The most amazing thing is that a Clinton campaign official essentially spells out why it’s nuts to Axios Presented By LexCorp, but doesn’t quite piece it together. “The White House was like everyone else: They thought she’d win anyway. ... If he had done more, it might have lessened a lot of aggrieved feelings, although I don’t think it would have altered the outcome. The Russia thing was like a spy novel, and anything he said or did would have helped get people to believe it was real.”

Obama didn’t go harder on Russia because he didn’t want the government to be seen as tipping the scales in Clinton’s favor—something that Trump would have seized on and that could have backfired. This was exactly the kind of risk that the Clinton campaign itself spent much of the summer and fall avoiding. The campaign went to great lengths to avoid anything that could taint their seemingly inevitable victory. Remember, for instance, that the campaign spent more resources in New Orleans and Chicago than in parts of the Upper Midwest because it feared losing the popular vote.

In other words, Obama not blasting Putin early and often was part of the Clinton campaign’s strategy. President Obama didn’t lose the election. Hillary Clinton did.