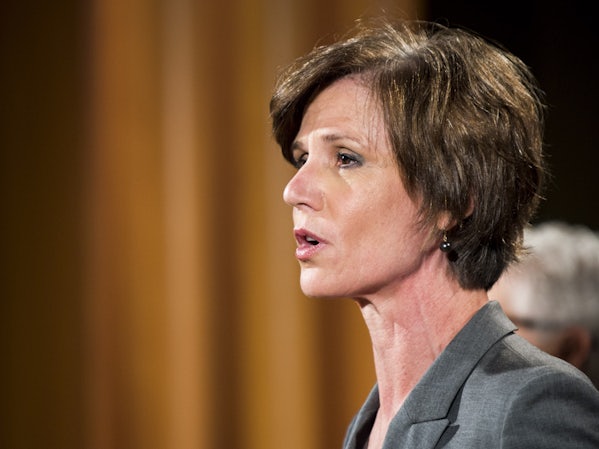 Did Sally Yates choose to get fired to make Donald Trump own his racism?

Two former government lawyers with directly relevant experience, Jack Goldsmith and Marty Lederman, have different views about whether Sally Yates, the acting Attorney General whom Trump fired Monday night, acted appropriately when she announced the Justice Department, under her leadership, would not defend Trump’s executive order on immigration. Goldsmith says she should’ve just resigned; Lederman says she was within her rights to be insubordinate, knowing she’d be fired.

That’s the crux of the argument I find most interesting. As Lederman notes, “It’s not clear why they think the particular form of Yates’s dissent is so important. Yates knew full well that she would not be the Acting AG today (or within a few days, at latest), whether by way of resignation or removal.”

Indeed, reporting by the New York Times suggests Yates’ decision to get herself fired stemmed at least in part from the desire to get the DOJ and the White House on the same page as quickly as possible. If she’d resigned, she’d have been succeeded automatically by another Obama official who would have faced the same conundrum. Getting herself fired allowed Trump to select a non-conflicted replacement.

But on top of any practical considerations, it really looks like Yates took this route so she could place the onus on Trump to make clear he is intent on implementing an executive order that senior government officials believe to be unconstitutionally bigoted. She could have included that basic rationale in a resignation letter, but that would have allowed Trump to passively press ahead.

When Yates wrote in her memo to DOJ that a full legal analysis would “take account of statements made by an administration or it[s] surrogates close in time to the issuance of an Executive Order that may bear on the order’s purpose,” she was very clearly referring to statements by Trump and Rudy Giuliani, who recently admitted Trump asked for help instituting a “Muslim ban” that was drafted “legally.” This speaks to intent, which might in turn speak to whether the order is ultimately struck down in part or in full by the Supreme Court. She put Trump on notice that she couldn’t defend the order because the order is discriminatory in a way that makes it unlawful. And he chose to say, in effect, Fuck your feelings. Intentionally or not, she showed there’s a difference between slinking away and sticking your head up, knowing it will be cut off.