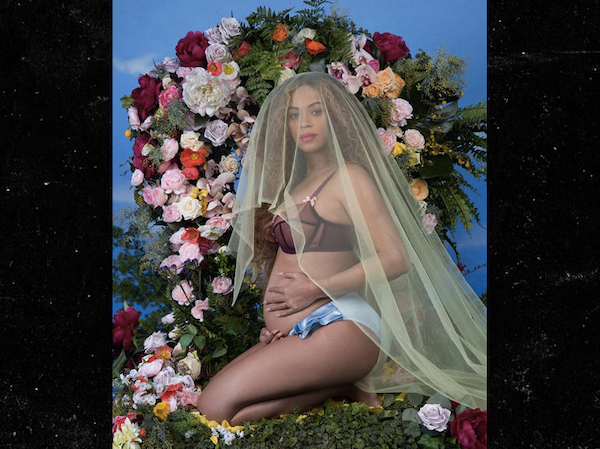 The royal family expands by two!

Beyoncé is pregnant, and it’s twins. She made the announcement Wednesday via Instagram, posting an arresting image of herself cradling her belly against an oddly funereal floral display. The caption clarified that there are two babies in there rather than one and is signed, “The Carters.”

Despite the signature, Jay Z is nowhere to be seen in the image. This is a fully-branded Beyoncé moment. She dropped the news on the first day of Black History Month 2017, just as she premiered “Formation” in the first week of February 2016. The image’s styling is highly referential, and striking.

In her curves, her wimple, and her beatific face, Beyoncé is set against a bright blue sky like a late medieval or Renaissance Madonna. She is as soft as the Aldobrandini Madonna, who is also dressed in blue and pinkish red:

And look—two babies! Perhaps we should be guessing baby names using the Bible.

The final word must go to Twitter user @GrainneMaguire, who made the following piquant observation:

This is happy news in a dark time. Long live the Carters; long may they reign.