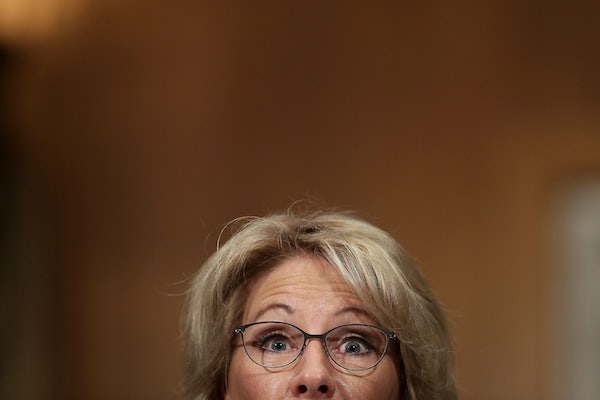 Rex Tillerson was confirmed as secretary of state on Wednesday afternoon with three Democrat votes—Mark Warner, Joe Manchin, and Heidi Heitkamp—and all 52 Republican votes. But Trump’s education nominee, the billionaire anti–public education advocate Betsy DeVos, looks like it’s increasingly in jeopardy. Two Republican senators, Maine’s Susan Collins and Alaska’s Lisa Murkowski, have said that they will vote against her confirmation. That means that only one more vote is needed and a number of Republicans—Pennsylvania’s Pat Toomey, Ohio’s Rob Portman, and Arizona’s Jeff Flake, in particular—could change their mind. Constituent calls have been enormously effective in rallying the Senate against DeVos, who has given money to the campaigns and affiliated super PACs of a number of Republican senators.

DeVos’s performance during hearings was abysmal—she not only cheated on her homework but also did little to assuage doubts that she was a radical intent on undoing the American public school system as we know it. The bare minimum for DeVos was to display a degree of competence and understanding of the education system, but she failed. Still, DeVos’s ideology remains the biggest reason why senators—and thousands of their constituents—oppose her nomination. Collins and Murkowski indicated that they would be voting against DeVos because of her advocacy for “school choice” and vouchers that would have a disastrous effect on rural school districts.

Of course, two Republican senators voting “no” means nothing unless a third joins them. Right now Vice President Mike Pence, who has a close relationship with DeVos, would simply break the 50-50 tie. But DeVos is looking increasingly vulnerable—especially if constituents keep calling Republican fence-sitters.