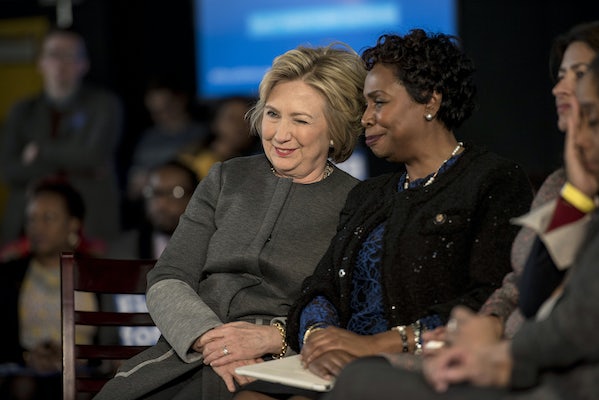 The Democratic Party has a race problem.

That was the conclusion of several prominent attendees at the Congressional Progressive Caucus’ annual retreat on Saturday, when a progressive congresswoman and a prominent party strategist criticized Democratic minority outreach.

“One of the things I find is a progressive blind spot is race,” said pollster Cornell Belcher, who previously worked for President Barack Obama’s presidential campaigns and the Democratic National Committee. “Republicans get race. They get it, and they understand how to organize around it.”

Representative Yvette Clarke, of Brooklyn, said her party doesn’t. “I will tell you one of the things that I found most disheartening in the last election cycle was this implied distrust of communities of color,” she said, summarizing the attitude: “We cannot vest any resources with you, but when we need you, you should be ready to be deployed.” She added, “We had the strategy on the ground already. We were just waiting for manna from heaven. It never showed up. And when it did, it was an insult. It was an insult. I don’t want to go through another election cycle like that.”

Belcher had his own harsh reprimands for fellow liberals. “When our young brothers and sisters want to talk about criminal justice reform, you in the progressive community can’t push their issue aside and want to talk about what your issue is,” he said. “We gotta meet them where they are. I was frustrated as hell this cycle working with progressives, because every progressive table I was around was like, ‘Okay, these are our four issues. Let’s talk to [voters] about our four issues,’ regardless of what these young folks’ four issues were. That shit’s gotta stop.”

Despite President Donald Trump’s success with the white working class, Belcher said courting these voters shouldn’t be progressives’ first priority. “When people say they want to take their country back, we should stop pretending we don’t know what that frickin’ means,” he said. “Democrats, you’re not going to win blue-collar whites anytime soon. You’re not.”

Instead, Belcher said Democrats should focus on turning out minority voters—starting with more political groups run and staffed by minorities:

Stop funding these one or two organizations that, quite frankly—how do I say this, congresswoman? maybe it’s ‘passive bigotry of progressives’?—where you fund these one or two primarily white organizations ... and they have to go communicate with people of color.... We shouldn’t go into another election cycle where there’s not a black or brown Super PAC that has the funding that Priorities [USA Action] does.

Belcher said this progressive blind spot manifested itself in a central conceit of the Clinton campaign: that she’d do better than Obama among white women.

“She didn’t do better among white women,” Belcher whispered into his microphone, prompting nodding heads and murmurs of agreement in the crowd. In politics, he said, “race has trumped gender.”