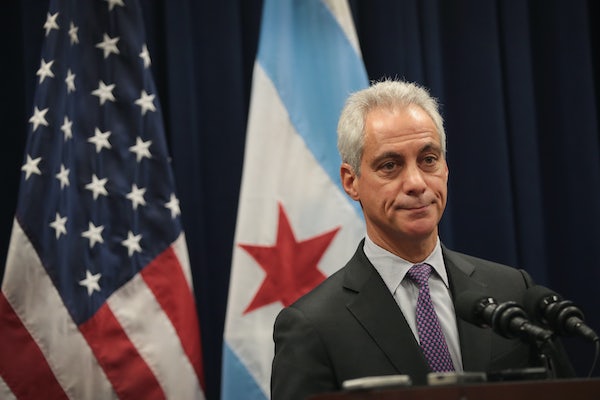 Massive protests are rattling President Donald Trump, public outcry nearly knocked off education secretary nominee Betsy DeVos, and legal challenges have temporarily halted the Muslim ban—a resistance that has heartened Democrats, who are hoping to mount a comeback in the 2018 midterm elections. But on Monday, Chicago Mayor Rahm Emanuel said, “It ain’t gonna happen in 2018. Take a chill pill, man.”

Speaking at Stanford University, Emanuel offered his advice on how the Democratic Party can make incremental gains in two years, The Chicago Tribune reported:

As he did last month at an event in Washington, D.C., the mayor expanded on what he believes is the road map back to power for his party — putting moderate candidates such as veterans, football players, sheriffs and business people up in Republican districts, picking battles with Republicans, exploiting wedges within the GOP and fighting attempts to redistrict Congress on partisan grounds.

But this time he didn’t hold back on his frustration with some of his fellow Democrats.

“Winning’s everything,” he said. “If you don’t win, you can’t make the public policy. I say that because it is hard for people in our party to accept that principle. Sometimes, you’ve just got to win, OK? Our party likes to be right, even if they lose.”

Even if retaking Congress is a tall order, why keep Democrats dispirited? Surely a party that thinks it has a shot will mount a stronger campaign. And there’s no telling what the political landscape will look like in two years. What if the left truly does achieve a Tea Party–like insurgency? Emanuel may be waving the white flag of surrender ahead of a race that’s very much in play.

Emanuel should also ask anyone who supported Bernie Sanders last year whether they think the Democratic Party’s problem is ideological purity. Hillary Clinton was always more progressive than her left-wing critics allowed, but there’s no doubt she was more centrist, cautious and calculating than Sanders. Neither Emanuel nor any other Democrat knows what would happen if the party adopted a left-wing platform.

Certainly Democrats shouldn’t delude themselves about how far the Trump backlash can carry them, and of course the party should make strategic decisions about candidates in moderate and right-leaning districts. But it’s a shame that the man who served as chief of staff to President Barack Obama is all of a sudden reprimanding Democrats for the audacity of hope.