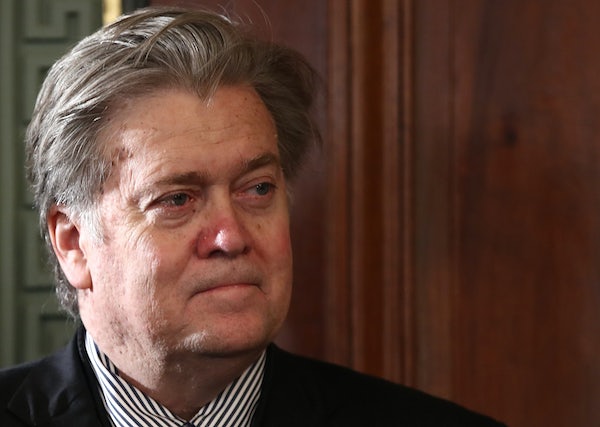 Has Steve Bannon, the brains of the Trump White House, read more than three books?

Politico has a fairly long feature about Bannon’s reading habits, titled, “What Steve Bannon Wants You to Read.” According to at least one source, Bannon’s intellect is formidable. The proof? Bannon’s enthusiasm for The Art of War, better known as the only other book owned by bros who already own I Hope They Serve Beer in Hell.

Bannon, described by one associate as “the most well-read person in Washington,” is known for recommending books to colleagues and friends, according to multiple people who have worked alongside him. He is a voracious reader who devours works of history and political theory “in like an hour,” said a former associate whom Bannon urged to read Sun Tsu’s The Art of War. “He’s like the ‘Rainman’ of nationalism.”

While the piece spends a great deal of time digging into Bannon’s biggest influences, it’s not exactly a reading list. Here are all of the books mentioned:

This reading list does not suggest “the ‘Rainman’ of nationalism,” so much as “an unambitious rightwing college freshman at Claremont McKenna” or “someone who only buys books from the clearance section at Barnes & Noble.” Only in Trump’s White House would a guy whose taste in books could be defined as “airport bookstore” be considered an intellectual.

Along with this paltry reading list, we know that Bannon also enjoys Titus Andronicus, the Bhagavad Gita, and David Halberstam’s The Best and the Brightest. If you know other books Steve Bannon has read, hit me up.