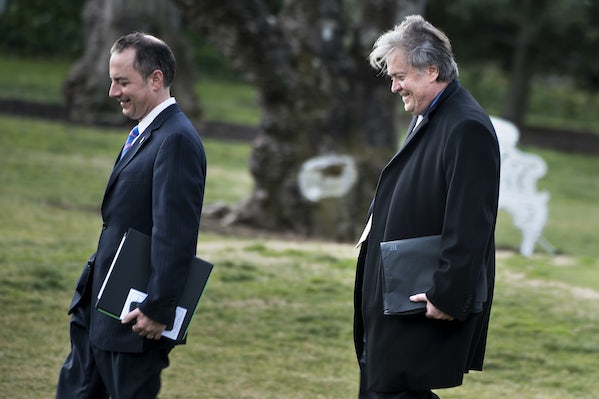 How long can Reince Priebus and Steve Bannon pretend to like each other?

President Donald Trump’s two top aides are doing their darnedest in a new interview with New York magazine’s Olivia Nuzzi, performing what she calls “a buddy comedy” routine and downplaying reports that they’re locked in mortal combat for presidential influence.

Priebus, the White House chief of staff, and Bannon, the president’s chief strategist, finish each other’s sentences. They say they’re in constant communication every waking hour, until one of them nods off to sleep. (“You fell asleep last night,” Priebus says to Bannon.) They claim to be best buds, and they want everyone to know it.

As for that speculation that Priebus, the former Republican National Committee chairman, is behind stories touting Bannon’s vast influence, angling to anger an insecure Trump? “It’s totally ridiculous and I don’t have time to play the double-reverse-agent role and run the White House at the same time,”  Priebus says.

This isn’t the story sources close to the two men are telling reporters, including The New Yorker’s Ryan Lizza, who published a piece on “Steve Bannon and Reince Priebus’s War for the White House” just last week. And if their conflict is real, the question is how long Bannon and Priebus can keep up this act.

Bannon, the former Breitbart News chairman who represents Trump’s populist base, has an agenda ultimately at odds with Priebus and the GOP establishment. Bannon’s white nationalism runs afoul of conservative consensus on issues like trade, and he reportedly was the mastermind of Trump’s executive order barring immigration to the U.S. from seven Muslim-majority countries.

Bannon’s stated agenda is chaos: “I want to bring everything crashing down, and destroy all of today’s establishment.” Priebus is a party man who will be more interested in broadening Trump’s base—and the GOP’s—as time goes on. It’s hard to see this “friendship” lasting.