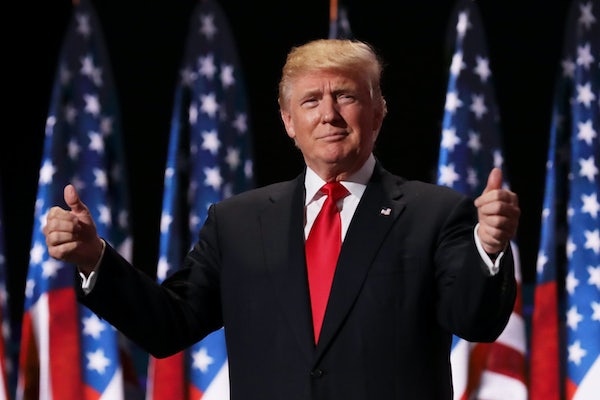 Donald Trump doesn’t know what the START treaty is, but he does know that it’s bad.

If there is a Trump doctrine, it’s that it’s totally cool to take positions on treaties and policies about which he knows nothing or next-to-nothing. Trump flummoxed Republicans by making statements that ran contrary to long-standing party orthodoxy, and his famously volatile call with the prime minister of Australia came only shortly after he learned of an agreement in which the United States agreed to take hundreds of refugees. On Thursday afternoon, Trump also reportedly told senators that he was open to the Gang of Eight immigration bill—which basically runs counter to every one of his stated immigration policies. The only explanation is that he has no freaking clue what it is.

On Thursday morning, the so-called New START treaty—which limits Russian and American deployment of nuclear warheads—came up in a call between Trump and his good buddy Vladimir Putin. According to Reuters, Trump had to be briefed on the treaty mid-call:

In his first call as president with Russian leader Vladimir Putin, Donald Trump denounced a treaty that caps U.S. and Russian deployment of nuclear warheads as a bad deal for the United States, according to two U.S. officials and one former U.S. official with knowledge of the call.

When Putin raised the possibility of extending the 2010 treaty, known as New START, Trump paused to ask his aides in an aside what the treaty was, these sources said.

Trump then told Putin the treaty was one of several bad deals negotiated by the Obama administration, saying that New START favored Russia. Trump also talked about his own popularity, the sources said.

Trump’s only guiding ethos seems to be that deals negotiated by Obama are bad because they were negotiated by Obama. Trump claims to be one of the world’s greatest negotiators and has said that he literally wrote the book on negotiating. (He didn’t.) But as president, Trump has yet to show his supposedly first-rate negotiation skills. Instead, he creates unnecessary diplomatic crisis after unnecessary diplomatic crisis, for no other reason than his persistent belief that Obama is bad and that he is good.