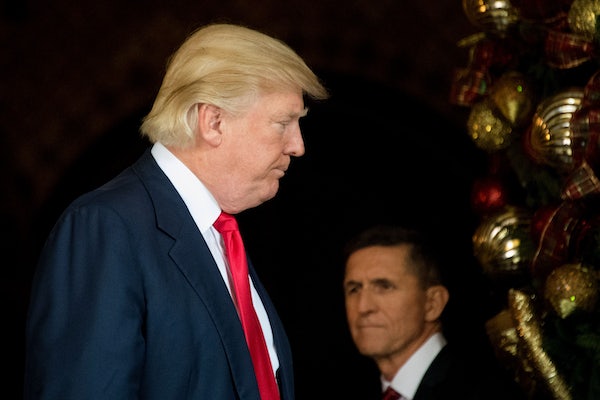 Trump’s national security advisor Michael Flynn is being tossed under the bus.

The last time we checked in with Flynn, Trump was complaining that he was overbearing and talked too much. Now it appears he is in some serious trouble, with The Washington Post reporting that Flynn, despite his and the Trump administration’s denials, did in fact discuss U.S. sanctions against Russia with Russian Ambassador Sergey Kislyak last December, when Barack Obama was still in office. According to current and former American officials, Flynn’s communications were “inappropriate” and a “potentially illegal signal to the Kremlin that it could expect a reprieve from sanctions that were being imposed by the Obama administration in late December to punish Russia for its alleged interference in the 2016 election.”

Flynn is now backing away from his denials, telling the Post that “while he had no recollection of discussing sanctions, he couldn’t be certain that the topic never came up.” This puts him at odds with some members of the Trump administration, most notably Vice President Mike Pence, who publicly went to bat for Flynn. Last month, Pence denied that Flynn discussed sanctions with Russian officials. Now the White House is telling the Post that he “made his comments based on his conversation with Flynn.”

The White House’s relationship with Russia has been subject to scrutiny given President Trump’s (and Flynn’s) admiration for Vladimir Putin. The FBI is continuing to investigate the Flynn matter, and could even end up prosecuting him under the Logan Act, which forbids unauthorized civilians from messing with U.S. diplomacy. But before any of that happens, the administration is quickly separating itself from Flynn. He is on his own.