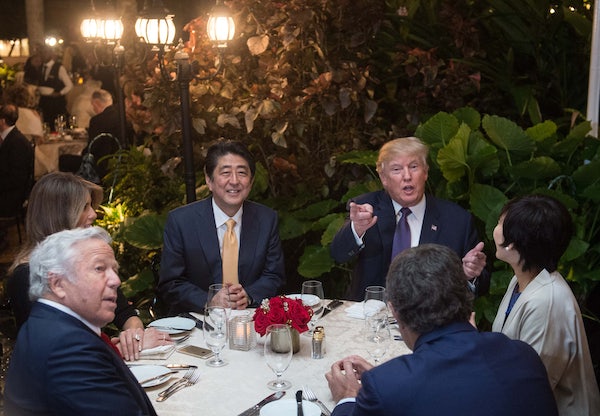 Donald Trump is really sloppy with sensitive information about our national security.

Trump was having dinner at his Mar-a-Lago club in Florida on Saturday when he learned that North Korea had launched an intermediate-range ballistic missile. According to CNN, he “took the call on a mobile phone at his table, which was set squarely in the middle of the private club’s dining area,” with Japanese Prime Minister Shinzo Abe by his side:

As Mar-a-Lago’s wealthy members looked on from their tables, and with a keyboard player crooning in the background, Trump and Abe’s evening meal quickly morphed into a strategy session, the decision-making on full view to fellow diners, who described it in detail to CNN.

Discussing sensitive national security matters within earshot of his private club members is shockingly reckless, and as The Washington Post’s Philip Bump noted Monday, Trump is making a habit of these dangerous slip-ups. Last week, he was criticized for leaving the key in a classified lockbag while hosting people without security clearance in the Oval Office.

Bump rightly observes that the Mar-a-Lago incident was far worse. Trump, Abe, and aides were using lights from smartphones to pour over security documents, and it’s not at all clear the phones were secure. They could have been vulnerable to hacking, giving America’s enemies an even better chance to eavesdrop on two world leaders than club guests in close proximity.

As Politico’s Eric Geller notes, it also appears that a Mar-a-Lago guest posed with the military aide who carries “the football” (the briefcase containing instructions for authorizing a nuclear attack).

This is just the latest example of how Trump’s ignorance of protocol could have disastrous consequences for the United States.