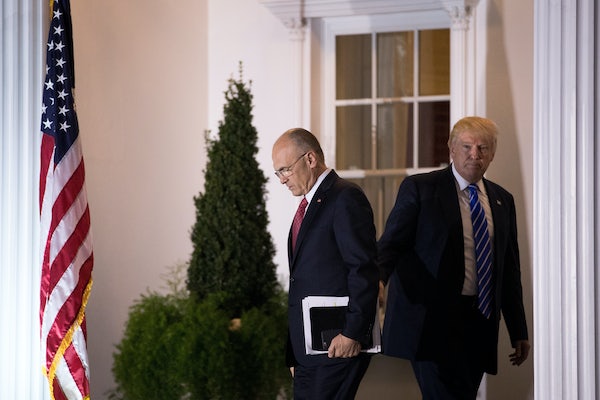 Democrats have been successful at making some of Trump’s appointees uncomfortable. Rex Tillerson’s coziness with Vladimir Putin damaged him, and Betsy DeVos’s general dislike for the concept of education nearly sunk her nomination. But Democrats haven’t gotten enough Republicans to defect to actually scuttle a nomination. DeVos’s nomination was carefully managed by Mitch McConnell, who let two vulnerable senators who represent many rural students—Maine’s Susan Collins and Alaska’s Lisa Murkowski—vote no. Vice President Mike Pence then broke a 50-50 tie, making DeVos secretary of education.

McConnell has another vulnerable nominee in Andrew Puzder, Trump’s pro-robot, anti–living wage labor secretary nominee. He has a number of blemishes on his record: Aside from his poor record as CEO of Hardee’s, Puzder employed an undocumented immigrant, was accused by his ex-wife of domestic abuse on Oprah, and owes millions to a bank that is facing accusations of interest rate manipulation and tax evasion. The Washington Post reports that four Republican senators–Collins, Murkowski, South Carolina’s Tim Scott, and Georgia’s Johnny Isakson—are all on the fence about Puzder, as is Democrat Joe Manchin, who has supported some of Trump’s nominees.

McConnell is very good at managing these situations. That these senators are expressing concern merely suggests what was already true: that Puzder is a controversial nominee with a checkered history. But with much of Trump’s cabinet confirmed—and with foreclosure enthusiast Steven Mnuchin on his way to heading the Treasury—this is the Democrats’ best hope at taking down one of Trump’s nominees.