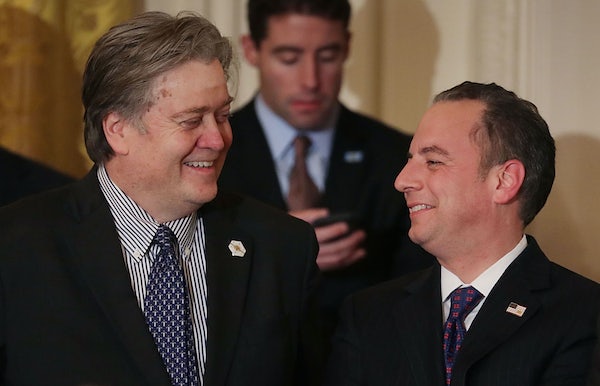 The knives are out for Reince Priebus.

In the latest sign of turmoil within Republican ranks, Breitbart has a published a long, conspiracy-tinged article blaming the White House chief of staff for all of the Trump administration’s ills. The headline on the Breitbart front page is particularly alarming: WH SOURCES: PRIEBUS LETTING “SLEEPER CELL” OBAMA HOLDOVERS UNDERMINE TRUMP ADMIN.

The theory developed in the article is that the resignation of Mike Flynn as national security adviser was instigated by Sally Yates, the former acting attorney general who Trump fired after she refused to defend Trump’s immigration executive order. According to Breitbart:

Trump’s chief strategist Steve Bannon was, of course, the former CEO of Breitbart News. So it’s easy to read the Breitbart piece as part of a power struggle between Bannon and Priebus, who have unconvincingly claimed that they get along just fine. The Bannon camp is using the Flynn scandal as cover to undermnie Priebus. And if Priebus were to be sacked or sidelined, Bannon would be able to consolidate his already powerful White House position.