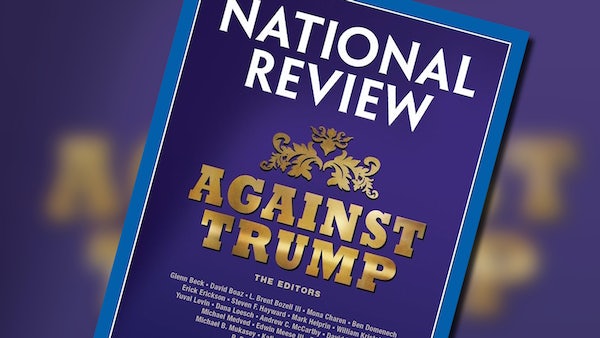 National Review has shifted from “Never Trump” to “Keep Trump True to Trumpism!”

The flagship journal of American conservatism continues to find a way to reconcile itself with the Republican president it once opposed. Just as some believers try to be more Catholic than the Pope, National Review is casting itself as more Trumpian than the president.

This tendency was on display in an editorial calling for Republicans to reject Andrew Puzder’s nomination to lead the Labor Department. According to the magazine, Puzder is unworthy of the position because he’ll betray the president’s hardline anti-immigration stance:

Andrew Puzder was from the start an odd choice to head Donald Trump’s Labor Department. The chief of CKE Restaurants, the parent company of fast-food chains such as Carl’s Jr. and Hardee’s, Puzder has long been one of corporate America’s most high-profile advocates of Gang of Eight-style “comprehensive immigration reform” — or, put another way, one of the most high-profile advocates of precisely the approach to immigration policy that Donald Trump opposed during his campaign.

This editorial clarifies the degree to which National Review’s “Never Trump” stance was personal rather than political. If the magazine could have Trumpism without Trump, or even just a Trump who consistently does what he promises, it will be happy. Trumpism has become mainstream American conservatism.