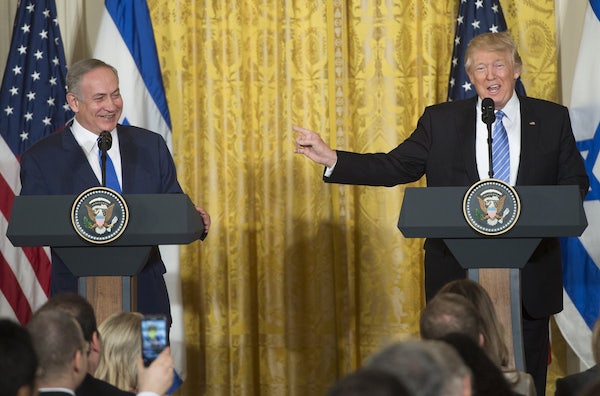 Donald Trump “can live” with a one-state solution in Israel or, you know, whatever.

During a press conference this morning with Israeli Prime Minister Benjamin Netanyahu, Trump was asked if he was giving up on the goal of a two-state solution to the Israeli-Palestinian conflict, which has been U.S. policy since the Clinton administration. Trump’s response was a typical muddle. “So, I’m looking at two-state and one-state and I like the one that both parties like,” Trump said, as Netanyahu chuckled. “I’m very happy with the one both parties like. I can live with either one.”

In practical terms, this new policy (if you can call it that) means Israel will have a freer hand in negotiations, with the United States no longer being committed to a Palestinian state as an end goal. But is Trump really clear about what the “one-state solution” would mean in the long run?

There are three ways a one-state solution could work: one would be a secular, democratic state that respects the rights of all citizens; the second would be a Jewish-dominated apartheid state with Arabs as second-class citizens; and third is an Arab-dominated apartheid state with Jews as second-class citizens. The main reason the one-state solution is so controversial is the challenge of creating a secular, democratic polity given the existing tensions between Jews and Arabs.

It’s not at all clear though that Trump realizes that—or indeed has any idea about the differences between a one-state and two-state solution.