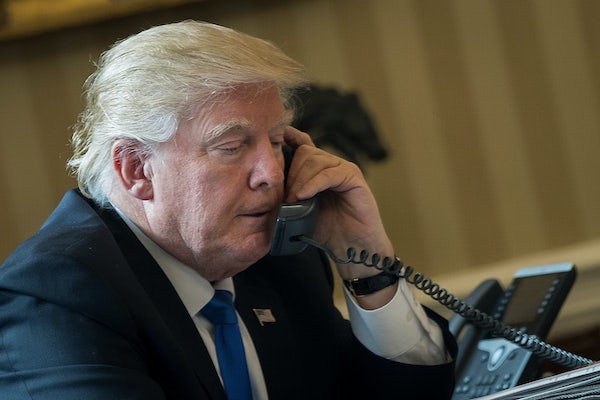 Donald Trump is coming for the leakers.

Exactly a month ago, Politico’s Jack Shafer predicted, “The intelligence establishment, which Trump has deprecated over the issue of Russian hacking, owes him no favors and less respect. It will be in their institutional interest to leak damaging material on Trump.” That didn’t take long! The first month of Trump’s presidency has been shaped by anonymous leaks, many coming from the intelligence agencies that he disparaged. The leaks have, for instance, kept the public’s attention on Trump’s connection to Russia.

At the same time, intelligence agencies are also holding back information from the untrustworthy Trump. The Wall Street Journal reported on Wednesday evening that “U.S. intelligence officials have withheld sensitive intelligence from President Donald Trump because they are concerned it could be leaked or compromised, according to current and former officials familiar with the matter.”

It’s possible that this could continue for four—or even eight!—years. But it seems unlikely. Instead, this leaking will spur an equal and opposite reaction from the White House. Trump and his cronies have struggled to figure out their messaging on the Russia story—they’ve been all over the place, while effectively conceding that the basic facts being reported are true. But over the last few days Trump and his allies in Congress and the conservative media have settled on a counter-narrative: The story here isn’t that Trump’s campaign regularly spoke to Russian intelligence, it’s that members of the intelligence community illegally leaked it to the press.

On Wednesday, Trump tweeted five different responses to Michael Flynn’s resignation as national security adviser. On Thursday, he was more disciplined (if you can ever say that Trump is disciplined):

This is fairly transparent bullshit—that a political campaign would have regular contact with a foreign government is obviously newsworthy, and certainly more notable than members of the intelligence community leaking to the press. But Trump could use the leaks as an excuse to crack down on an intelligence community that he perceives as his enemy. Per The New York Times:

President Trump plans to assign [Stephen Feinberg] a New York billionaire to lead a broad review of American intelligence agencies, according to administration officials, an effort that members of the intelligence community fear could curtail their independence and reduce the flow of information that contradicts the president’s worldview....

Feinberg’s appointment is most notable because he has no national security experience—he is there to assess loyalty more than anything else. It’s also notable because many of the leaks seem to becoming not from the intelligence community but from the White House itself. But that’s largely irrelevant if you’re looking for a scapegoat—and a way to shift the conversation away from a damaging story suggesting collusion with a foreign government.

Trump’s presidency has been weakened by leaks, but when Trump is weakened he lashes out. We certainly saw this on the campaign trail, but now Trump has immense amounts of power. It looks like he will wield it against the leakers.