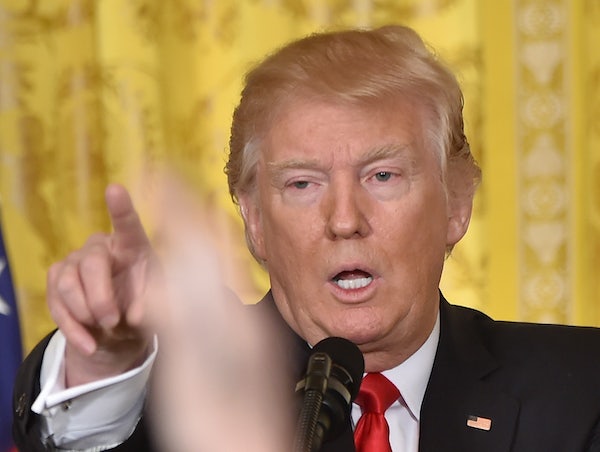 The presser was easily the weirdest rollout of a labor secretary ever. It was probably the weirdest presidential press conference ever—like a batshit, off-the-rails version of Nixon’s “Checkers” routine. It may very well have been the weirdest public moment in presidential history, period, and Trump has only been in office for 27 days.

After briefly mentioning that he was nominating Alex Acosta, a former federal prosecutor, as labor secretary, Trump read a lengthy statement. In it, he laid into the media for reporting what he claimed were fake news stories. These stories included the firing of Michael Flynn, who was caught talking to Russia about U.S. sanctions a month before Trump’s inauguration, and reports about how chaotic and unfocused his White House has been. “This administration is running like a fine-tuned machine,” Trump lied. He also delivered what will surely go down as a historic Trumpism: “The leaks are real, but the news is fake.” That statement also summed up the general incoherence of Trump’s press conference. There will certainly be much talk about how well it “played to the base” in the coming days, but Trump is not president of his base and it’s unlikely that many people will look at what unfolded on Thursday afternoon and see a president looking out for their interests.

Trump is having a campaign-style rally on Saturday, and his press conference was, in many ways, a return to campaigning. Given how all over the place it was, it’s difficult to distill anything thematic from Trump’s news conference. But his statement and the question-and-answer portion were largely spent ranting and raving at the media and Hillary Clinton. Trump, meanwhile, took responsibility for nothing.

Some of Trump’s statements—particularly his praise of Michael Flynn, his statements about his relationship with Russia, and his comments about immigration (Trump seemed to endorse amnesty at one point)—deserve more attention, and will certainly get it. But what Trump said was less notable than how he said it. Trump joked at one point that, no matter what he said, the headlines would read: “Donald Trump rants and raves at the press.”

But that’s exactly what he did over the course of 70 minutes. The election was months ago but he not only bragged about his (relatively paltry) Electoral College victory, but also went off on how Clinton received questions before a CNN town hall during the Democratic Primary. He said he was the “least anti-semitic person ever” while patronizing a Jewish reporter. He asked a black reporter if she was friends with the Congressional Black Caucus. Above all, he seemed overmatched by the job—exhausted, bored, confused—and furious at perceived sleights.