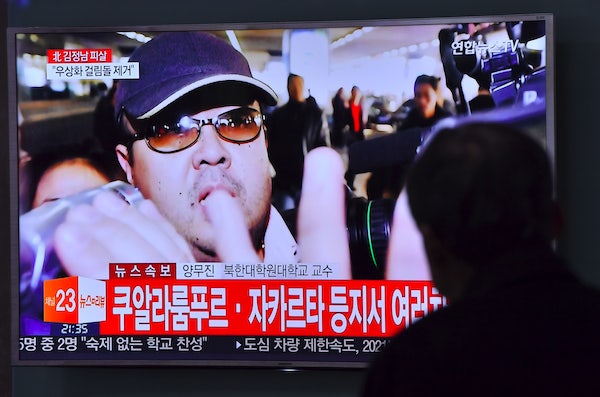 The killing of Kim Jong-un’s half brother is the most bizarre story in a week of bizarre stories.

The assassination in Kuala Lumpur of Kim Jong-nam, the half brother of the North Korean dictator, just took a very unusual turn. Malaysian police now say that one of the two alleged assailants was an unwitting dupe who was fooled into thinking she was carrying out a comedic prank. The Guardian reports:

An Indonesian woman arrested for suspected involvement in the killing of the North Korean dictator Kim Jong-un’s half-brother in Malaysia was duped into thinking she was part of a comedy show prank, Indonesia’s national police chief has said, citing information received from Malaysian authorities.

Tito Karnavian told reporters in Indonesia’s Aceh province that Siti Aisyah, 25, was paid to be involved in pranks.

He said she and another woman performed stunts which involved convincing men to close their eyes and then spraying them with water.

“Such an action was done three or four times and they were given a few dollars for it, and with the last target, Kim Jong-nam, allegedly there were dangerous materials in the sprayer,” Karnavian said. “She was not aware that it was an assassination attempt by alleged foreign agents.”

Aisyah emerges from the story as not only a patsy but a figure of genuine pathos, a single mother who was trying to support her family and got caught up in an international murder plot, likely ordered by an insane despot.