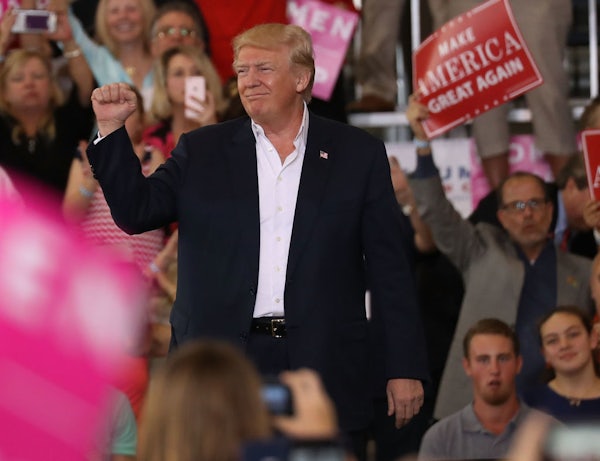 When it wasn’t terrifying, Donald Trump’s “campaign-style” rally was stale.

Trump needed this. His first month in office has been an unmitigated disaster. There are not only daily—practically hourly—reports from the West Wing of extreme incompetence, but Trump’s fourth week in office was defined by a major scandal: the resignation of National Security Adviser Michael Flynn. Things are not going well and Trump is clearly over-matched—when he isn’t bored—by the responsibilities of being president.

His “campaign-style” rally—ominously pitched as the start of the 2020 campaign—existed primarily to make Trump feel good about himself. Getting back on the campaign trail was a way to regain his mojo. Trump needs crowds to tell him that he is good and is doing a good job, because every other available metric—polls, reporting, basic cognitive functions—say that he is, in fact, doing a very bad job and that he is historically unpopular. He got that on Saturday—in many ways, Trump’s rally most resembled his rallies from mid-August 2016, when it seemed like his campaign was crashing to earth. The biggest takeaway from the rally was that Trump seemed genuinely happy in a way that he hasn’t since he took office.

It was, in effect, a greatest hits rally. Like going to see Boston or .38 Special in 2017, Trump did tired versions of old favorites: He talked about the border wall (now, hilariously, the “great border wall”) and companies moving overseas and the terrible Democrats and how the federal government is getting screwed by private companies. At one point, resembling late-period Lenny Bruce, he read the travel ban executive order to the crowd to point out ... something. He brought out a rabid fan to say a few words, which was probably the silliest thing I’ve ever seen a president do. Melania kicked things off by reading the Lord’s Prayer. It was a weird rally, in other words, but only because Trump was president—in most ways, it seemed like the kind of rally Trump did over and over again in the long summer of 2016.

One thing that was missing—perhaps the reason why the rally felt so unfocused and unmoored—was a foil. In 2016, Trump had Hillary Clinton, a career politician with ties to the corrupt establishment he was railing against. In 2017, Trump has nothing. He tried to hit two abstractions: the Democrats, who don’t have the power to really oppose his agenda, and the media. Trump’s attacks on the media and the First Amendment are genuinely ominous—on Saturday Trump quoted Thomas Jefferson to decry the “fake news” media. “I want to speak to you without the filter of the fake news,” Trump said at the beginning of his speech. It’s clear that Trump’s attacks on the media are meant to delegitimize one of the few American institutions capable of holding him to account. But Trump’s attacks on the media, though more pointed—he is now claiming that the news media is making up entire stories, which is insane—have always been at the center of his speeches to large crowds.

Trump’s rally will be held up by his surrogates on the Sunday shows and by press secretary/unwanted household pet Sean Spicer as proof that the polls that suggest that a clear majority of Americans disapprove of his presidency are “fake news.” That Trump is still leading a movement and that thousands of people at a rally somehow equal or negate the millions who are concerned about his ability to lead the country. But what was most notable about the rally was that Trump retreated to the safety of the stump speech—it may have been the least newsworthy event of his calamitous young presidency.