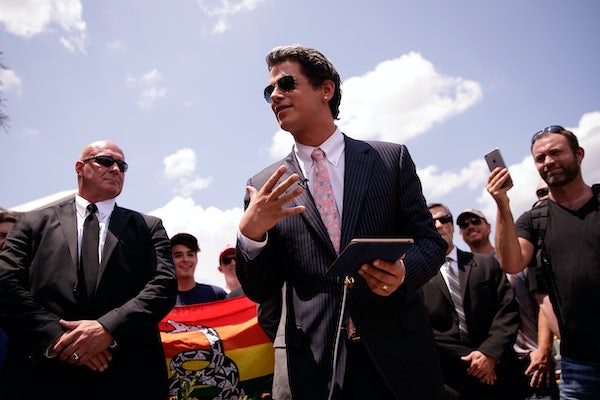 A University of Chicago professor has gone off on Milo Yiannopoulis’s opponents, calling them “spineless c*nts.”

In a blog post, Associate Professor of Medieval History Rachel Fulton Brown frames Yiannopoulis as a messenger of truth preaching to a populace sick of lies. In this passage, she cites the orthodox “lies” that he challenges:

That women don’t need men. That all men are potential rapists. That women should aspire to something other than motherhood or they are wasting their lives. That women should like casual sex with strangers, hooking up just for the sake of the orgasm. That the children will be fine if their parents divorce. That abortion is morally good.

“Gender roles work,” [Yiannopoulis] told them. “Feminism is cancer. Abortion is murder.” And the young women and men cheered for him, because they loved him for telling the truth.

Yiannopoulis has been accused of a form of “gay minstrelsy” in which he performs parts of stereotypical gayness in such a way that he shores up the beliefs of the hard American right. In the post, Brown appears to applaud him for just these traits:

Professor Jeffrey Jerome Cohen of George Washington University tweeted a screengrab from Brown’s Facebook page earlier today, in which she compares Yiannopoulis’s cancelled book contract to the crucifixion of Jesus:

As Cohen and other medievalists (including myself) have observed, strong veins of conservatism run through the field. Despite the efforts of scholars like Suzanne Conklin Akbari and Geraldine Heng, contemporary white supremacists and gender traditionalists sometimes look to an imagined version of the Middle Ages for a “purer” time, when (they imagine) sexual, racial, and theological identities were simpler.

The New Republic contacted the chair of the University of Chicago history faculty Emilio Kourí to ask whether Brown’s blog post, which can be reached through her faculty page, could be considered part of her body of scholarship. Kourí responded that Brown is “entitled to express her opinions and to publish them,” explaining that “blogs are not part of any performance or promotion reviews in the History Department.”

Indeed, blogs are “by and large not scholarship and are not regarded as such,” in Kourí’s view.

This view defines scholarship very narrowly: An increasing number of academics engage with the media outside peer review, and it is certainly arguable that a scholar’s broader presence in the culture informs their intellectual identity. Young academics are encouraged to build a visible online presence when they are seeking jobs. Brown is tenured so she can do whatever she wants. I cannot imagine a new PhD feeling entitled to use the language Professor Brown does at her site.

Exploiting the full freedom conferred upon her by tenure, Brown ended her blog post with an italicized line, reading, “Shame on all of you. You spineless cunts. The bullies are YOU.”