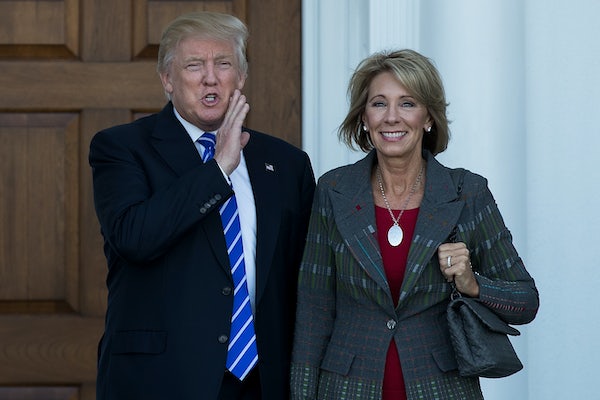 Betsy DeVos tried to do something good, so of course Donald Trump overruled her.

Against the education secretary’s objections, the administration is moving to reverse the Obama administration’s federal guidelines last year allowing students to use bathrooms corresponding with their gender identities.

“[Attorney General Jeff] Sessions, who strongly opposes expanding gay, lesbian and transgender rights, fought Ms. DeVos on the issue and pressed her to relent because he could not go forward without her consent. The order must come from the Justice and Education Departments,” The New York Times reported Wednesday. “DeVos, faced with the choice of resigning or defying the president, has agreed to go along.”

DeVos’s position isn’t entirely surprising. Her wealthy family has a history of funding anti-gay causes, but she herself quietly advocated for LGBT rights over the years, according to the Times. Yet Wednesday’s reporting suggests her personal moderation on this issue is irrelevant.

White House Press Secretary Sean Spicer addressed the topic at Tuesday’s briefing, telling reporters, “I think that all you have to do is look at what the president’s view has been for a long time—that this is not something that the federal government should be involved in, this is a states’ rights issue.”