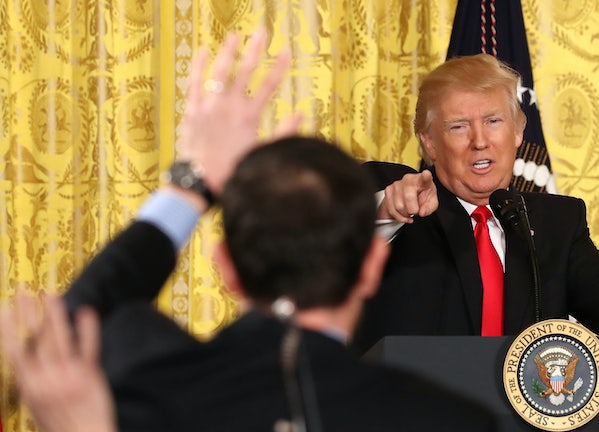 Lots of folks became alarmed last week when the president lambasted “FAKE NEWS media” outlets (such as The New York Times, NBC, ABC, CBS, and CNN) as “the enemy of the American People.” But so far his efforts to delegitimize the press may only be hurting himself, according to today’s new Quinnipiac poll. In addition to finding that Trump’s approval rating is only 38 percent, the poll also tested Trump against his major domestic political target.

The first question on this subject asked: “Do you approve or disapprove of the way the news media has covered President Trump?” Here the media only made out at 45 percent approval, to 50 percent disapproval—thus suggesting that Trump’s instincts to target the media are good.

The problem is that when he was put up against the media, he didn’t fare so well. The next question: “Do you approve or disapprove of the way President Trump talks about the media?” The result was only 35 percent approval, and 61 percent disapproval.

These results were notably in line with Trump’s own approval ratings. Which might tell us something: Sure, people are iffy on the media. But if Trump thinks that blaming them can get him out of trouble, it doesn’t appear to actually be working for him.