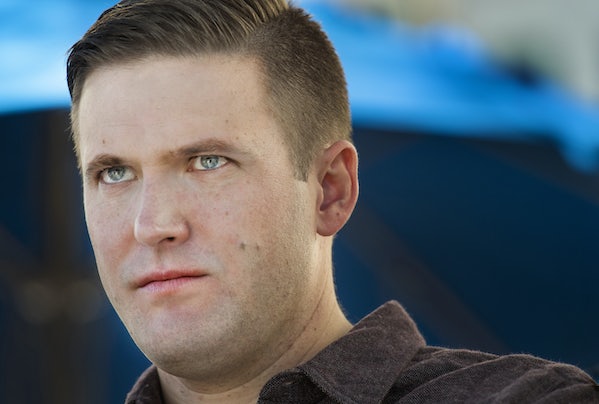 Dan Schneider—executive director of the American Conservative Union, which hosts the annual conservative conference—denounced the white nationalist movement from the stage Thursday. “There is a sinister organization that is trying to worm its way into our ranks,” he said. “We must not be duped. We must not be deceived.”

It’s tempting to give Schneider credit for distancing CPAC from overt white identity politics. He explicitly condemned an alt-right conference in Washington last year, where movement leader Richard Spencer waxed nostalgic about when America was “a white country designed for ourselves and our posterity” and audience members hailed him with Nazi salutes.

But then Schneider explained who he really blames for the movement that backed Donald Trump’s bigoted campaign: progressives. “They are nothing but garden-variety left-wing fascists,” he said of the alt-right.

Fascism is right-wing by definition, and the modern, multicultural left is precisely the opposite of the alt-right’s white identitarian politics. Schneider was similarly off-base arguing that the alt-right is more akin to socialists than conservatives, and suggesting they’d “hijacked a once-decent term” in calling themselves “alt-right.”

Spencer, who coined the term, was having none of this on Thursday. He was on hand at CPAC, and said Schneider’s comments were “objectively stupid.”

“Total bullshit,” he told reporters. “I wasn’t aware that left-wing fascists were so numerous—such a common persuasion.”

Spencer said Schneider’s remarks were evidence of the alt-right’s growing influence in politics, as it battles the traditional conservative movement. “The fact is, they weren’t talking about the alt-right a year ago, two years ago,” he said. “They now feel the need to talk about us.”

There’s something to that. Despite CPAC’s denouncement, Spencer certainly had fans at the conference: