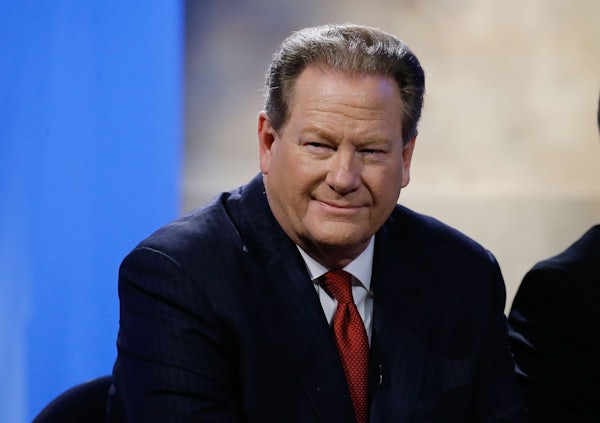 It wasn’t entirely surprising that the former progressive talk radio host and MSNBC personality agreed to speak at annual conservative conference this year. Once a self-styled “prairie populist,” he signed on last January with RT America, where he anchors the nightly news for the state-run Russian network. He’s changed his tone on President Vladimir Putin, whom he used to deride as “Putie.” “Schultz, who once said on MSNBC that Putin is ‘crippling’ his country, now has a Russo-friendly, or perhaps American-skeptical, viewpoint on any number of issues,” The Washington Post reported in December.

Schultz has done an about-face on Trump, too. After calling him a racist and ridiculing his presidential ambitions in 2011, he praised Trump’s political skills during the campaign and downplayed Russia’s role in his election. Still, none of that quite compares to the praise Schultz heaped on the president on Thursday, talking with reporters on CPAC’s radio row. “I think he’s pragmatic, and I think he wants to win—he wants to win for the little guy,” Schultz said.

Schultz predicted Trump “will go with the people” on healthcare, speculating that the president might slow Republican efforts to repeal the Affordable Care Act, and criticized Democrats’ opposition strategy. “They ought to be focused on saving healthcare,” Schultz said. “They ought to be focused on making sure we don’t privatize Medicare, Medicaid, and Social Security. That’s where the Democrats ought to be. Instead, they’re chasing down scandals or they’re making them up. I’m just—I’m a little disappointed in them right now.”

Rather, Democrats are probably disappointed in Schultz. He used to be a warrior for the working class—cable’s biggest critic of union-busting Wisconsin Governor Scott Walker, who also spoke at CPAC on Thursday. MSNBC’s Chris Matthews even once told Schultz he should run the AFL-CIO. But like a disconcerting number of white-working class Democrats, Schultz found common cause with Trump after supporting Bernie Sanders in the Democratic presidential primaries.

“I don’t agree with Trump on everything,” Schultz said on the radio row. Though he insisted his personal politics haven’t changed, he embraced Trump’s moral equivalence between the U.S. and Russia. Asked about the president’s remark to Fox News host Bill O’Reilly that America has “a lot of killers” and is “not so innocent,” he said, “I think the president was spot on saying that. I mean, could we say that Barack Obama was a killer? Let me just state the facts. The rest of the world is a little mad at America right now for the civilians that have been killed in drone strikes.”

Schultz praised liberal commentator Alan Colmes, who died Thursday, as “a prince of a person” and “a great radio talent.” He said “the fact that Fox News had him in prime time was a real statement of how good Alan was and how much he was respected.” Schultz’s apparent opportunism isn’t likely to bring him the same respect. He was a talk-radio conservative before he was a liberal, and his latest political persona is awfully convenient.

Schultz insisted that Russia has never told him what to say on air, and that he’s never even slanted a story to be more favorable to the nation. “The perception is that we’re propaganda, and we simply are not,” Schultz said. Which is worse: that he might be taking direction from the Kremlin, or that he’s doing their bidding freely?