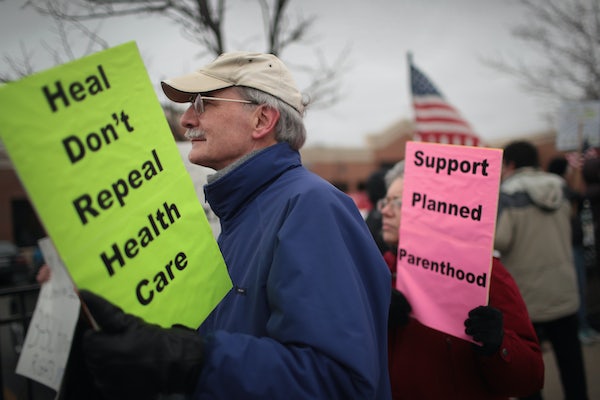 A draft bill to replace Obamacare contains terrible news for the sick and disabled.

The legislation would take down the foundation of Obamacare, including the unpopular individual mandate, subsidies based on people’s income, and all of the law’s taxes. It would significantly roll back Medicaid spending and give states money to create high risk pools for some people with pre-existing conditions.

The untitled bill also defunds Planned Parenthood, as well as any other publicly funded clinic that provides family planning services. It converts Medicaid to block grants to states, and allows states to determine which “essential benefits” those grants will cover. Insurers would be allowed to charge consumers more based on age, and women would have to purchase extra “abortion coverage” if they want insurance that covers a full range of reproductive health care options.

Its provisions are particularly dire news for chronically ill and disabled Americans. It replaces the ACA’s subsidies with age-restricted monthly tax credits. This assumes that young people are healthier than older people: that is true in a broad sense, but as a policy it excludes individuals with congenital or childhood-onset disease or disability.

The results would be deadly. An infant born with a hereditary condition usually requires extensive medical treatment after birth. That’s fine if it’s born into a wealthy family. But if it’s born into a low-income family, it’s in trouble: The monthly credit allotted for people under 20 won’t offset these expenses. And since the bill also allows states to determine which benefits it will cover, the credit allotted for people of child-bearing age also may not offset the cost of the high-risk pregnancy care and genetic counseling necessary to safely bring that child to term. Matters won’t improve much for the child as it ages, either: The bill relies on high-risk insurance pools to cover people with chronic conditions. In practice, these pools have proven insufficient to meet the needs of sick Americans.

Now take it further: Are you a poor teenager who requires medical equipment or a lengthy hospitalization? You’d better hope your state chooses to cover it, because your subsidy won’t be enough. Are you a female college student who needs family planning services? Better hope you can afford that too, because a party packed with zygote-obsessives has decided that your ability to control your reproduction is a luxury. Also hope there’s nothing wrong with the resulting baby, because you definitely can’t afford that either. Child with cancer? Parents will have to fire up the GoFundMe and hope for the best.

This bill, if ever implemented, would enforce life-shortening discrimination against the disabled and the chronically ill. It’ll reduce the number of Americans who can access health care, and it’ll penalize anyone who suffers from the traditionally deadly combination of poverty and illness.