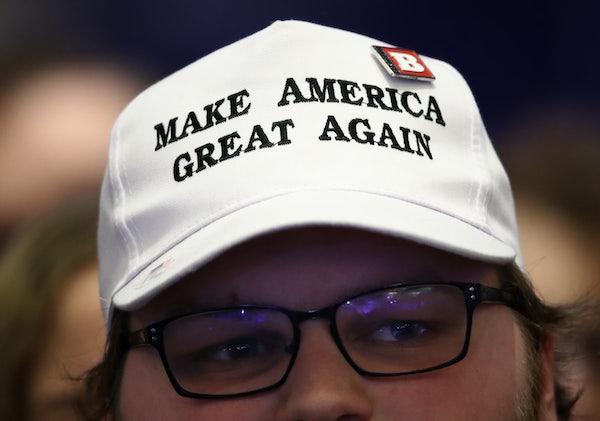 A year ago, then-candidate Donald Trump canceled his planned appearance at CPAC, amid accusations from activists and GOP primary rivals that he was not a true conservative. But this year, President Trump had conservatives at CPAC eating out of the palm of his hands, even when trampling on longstanding pillars of conservative doctrine. The First Amendment? Trump shrugged off its importance. Evoking God? Trump did it, but in his usual insincere way.

In addition to continuing to be fascinated by Bernie Sanders, he hated on free trade. “Not that I’m a fan of Bernie, but a lot of Bernie people voted for Trump,” he declared. “You know why? Because he’s right on one issue: trade. He was right about trade—our country is being absolutely devastated with bad trade deals.”

How is this possible? Because Trump railed against a reliable set of enemies. The “fake news” media, for example, dominated the early part of his speech. And when he revisited Hillary Clinton’s line last year about Trump supporters being “deplorables,” the crowd broke out into a new round of “Lock her up!”

Kellyanne Conway predicted yesterday that they would rename the yearly conservative conference “TPAC.” She was basically right. Trump has taken over the conservative movement along with the Republican Party, which has been reduced to a loose confederation of people who don’t like liberals. Trump has shown that it’s not really about what you stand for. It’s whom you stand against.