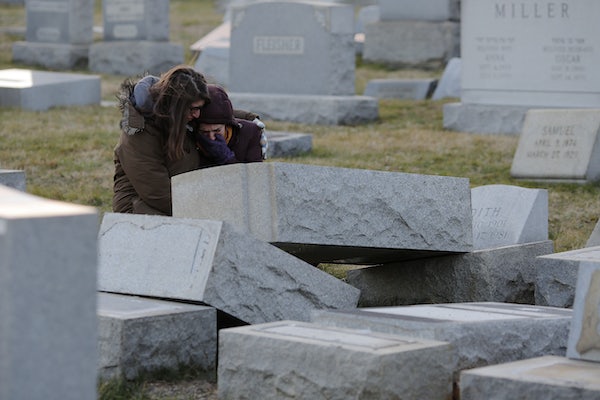 Donald Trump’s silence is even more telling than his outbursts.

Less than a week ago, the president made his first, belated statement addressing the anti-Semitism that has bubbled into vandalism and bomb threats in the early days of his presidency. As The New Republic reported at the time, the statement—following a tour of the National Museum of African-American History and Culture—achieved the bare acceptable minimum and was received tepidly by Jewish groups and the press. One of the strongest critics of the statement, the Anne Frank Center for Mutual Respect, wrote, “When President Trump responds to anti-Semitism proactively and in real time, and without pleas and pressure, that’s when we’ll be able to say this president has turned a corner. This is not that moment.”

In the six days since, the wave of hate and prejudice has not abated. On Wednesday, two Indian engineers in Kansas were shot—one fatally—by a gunman who interrogated the two men about their immigration status and shouted “go back to your country” before opening fire. Yesterday, more than 100 gravestones were knocked down in a Jewish cemetery in Philadelphia, mirroring the cemetery attack in St. Louis that preceded Trump’s statement.

And so far, after pledging to “fight bigotry, intolerance, and hatred in all of its very ugly forms,” Trump has said nothing to acknowledge or condemn either incident. If the Trump administration had any particular interest in combatting the perception that the president’s statement (issued after weeks of public pressure) was anything other than obligatory, his silence in the wake of these incidents has killed its chance.

Of course, the day before the statement, Trump alluded to a nonexistent terrorist incident in Sweden, and two days later returned to his dog-whistle condemnation of gun violence in Chicago. Trump’s choices on what incidents merit his comment reaffirm what we suspected: He condemns hate and violence when it bolsters his narratives about who is and is not vulnerable in America, when it can be manipulated into support for his positions, and when he is absolutely backed into a corner.