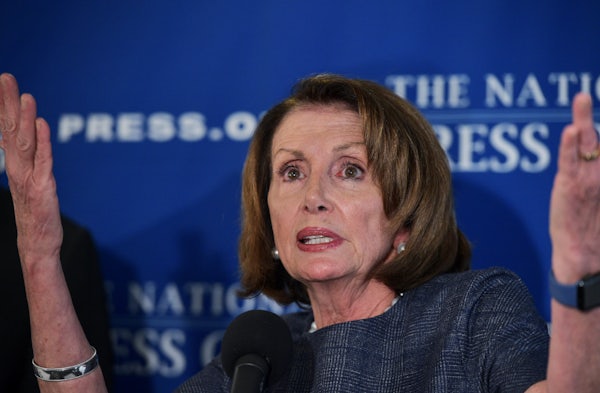 Nancy Pelosi thinks Trump’s presidency might be a message from God.

Speaking at the National Press Club on Monday, the House Minority Leader invoked the Almighty while reflecting on the Republican Party’s rightward lurch under President Donald Trump. “God is always with us, so we have to be hopeful and prayerful,” said Pelosi, who is Catholic. “But maybe God is telling us that we have not done our job completely to rid our country of some of the negative attitudes, whether it’s xenophobia, anti-immigrant, anti-woman, racist, in whatever way. That is part of the task we have before us.”

Ahead of Trump’s first joint address to Congress on Tuesday, Pelosi is stressing that the new administration has “done nothing” positive for the American people in its first 40 days. Here, too, she sees spiritual significance. “Forty days—it’s almost biblical,” she said on Monday, in reference to the time since Trump’s inauguration. “You know, 40 hours, we as Catholics observe, 40 days in the desert, Christ was there, 40 years in the desert that Moses was there—40 is fraught with meaning.”

Pelosi and Senate Minority Leader Chuck Schumer—who spoke alongside her at the Press Club—are casting Trump’s first 40 days as a betrayal of the working class constituency he pledged to champion in his populist campaign. They said he’s engaged in a bait-and-switch: staffing his administration with Wall Street bankers and billionaires and advancing what Schumer called a “hard, hard right” agenda, including slashing social programs. But Schumer predicted Republicans will fail in one of their biggest goals: “making America sick again” by repealing the Affordable Care Act. “The odds are very high we will keep the ACA,” he said. “It will not be repealed.”