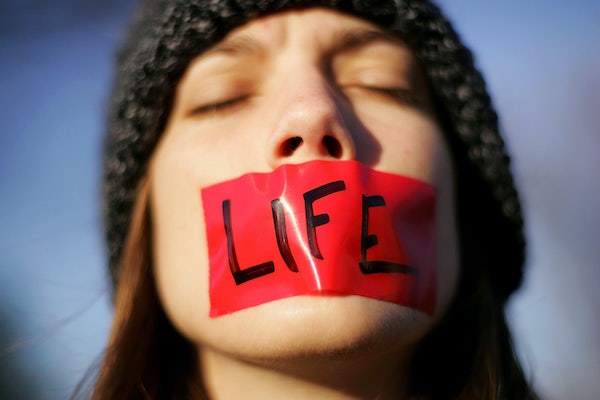 Why did the New York Times publish this anti-abortion screed?

In a misleading and tendentious Times op-ed, the Human Coalition’s Lauren Enriquez condemns pro-choice women in “the new feminist resistance movement” for failing to make space for abortion opponents. This is not a new argument—indeed it is very old and very tired—which makes the Times’s decision to publish it all the more difficult to understand. Just consider Enriquez’s use of polling to make her argument:

According to the latest Knights of Columbus/Marist Poll, an annual survey of views on abortion, just over half of all women want to see further restrictions on abortion. To millions of women, including young people like myself, this is not just a policy stance; it informs many areas of our lives as women. To us, “resistance” has to include opposition to the lie that freedom can be bought with the blood of our preborn children.

There is a lot going on here! According to the poll Enriquez cites, 52 percent of American women generally support what we would consider to be the Republican position on abortion—that abortion should be illegal in all or most cases. That’s not really “most” women; it’s roughly half of them. Furthermore, there’s more data on the issue. According to Pew Research Center, 57 percent of American women actually believe abortion should be legal in “all or most cases” and only 39 percent believe that it should be illegal in all or most cases. This tracks with earlier Gallup reporting. Nevertheless, the Times allowed Enriquez’s hyperbole to run. Talk about fake news.

Enriquez also isn’t really asking feminists to accommodate her. The language she deploys is carefully chosen to frame abortion as murder—an act that spills the blood of preborn children. “We reject the pressure to believe that killing our children and living full lives are mutually inclusive,” she writes, which describes no pro-choicer’s position. The implication here is that pro-choice women are at least soft on murder, if they haven’t committed it themselves. This is not the language a person uses when seeking allies. This is the language of conversion.

At Human Coalition, where I work, we extend tangible, compassionate help to pregnant women who believe that abortion is the best or only option available to them.

The Human Coalition runs crisis pregnancy centers. And unless you scroll to the bio at the bottom of the piece, you wouldn’t know that she’s also the PR manager for the organization. The Times essentially ran a press release promoting the organization’s work. That’s a strange editorial decision.