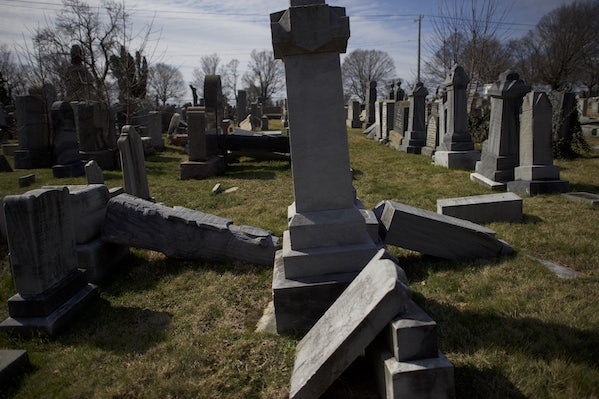 Asked about the recent bomb threats against Jewish community centers and the desecration of a number of Jewish cemeteries, Trump reportedly told a group of state attorneys general that anti-Semitism might not actually be to blame. Instead, he said this:

This is characteristically tough to parse. (For all that is made of Trump’s gift for insults, he struggles with concepts more complex than “Jeb Bush is a pussy” or “Ted Cruz is a creep.”) But the implication here is that Jews are desecrating their own cemeteries and calling bomb threats into their own community centers for the sole purpose of embarrassing him.

Whether Trump is suggesting Jews specifically are engaging in false flag operations or that some unnamed group is doing so, this is bonkers. But it’s largely in keeping with Trump’s approach to crisis. Trump is unable to take responsibility for anything, as we saw in his horrific response to the death of a Navy SEAL—Trump OK’d the mission, but blamed the military for its execution. Here, he’s merely muddying the waters, albeit in what might be the most immoral and disgusting way possible.