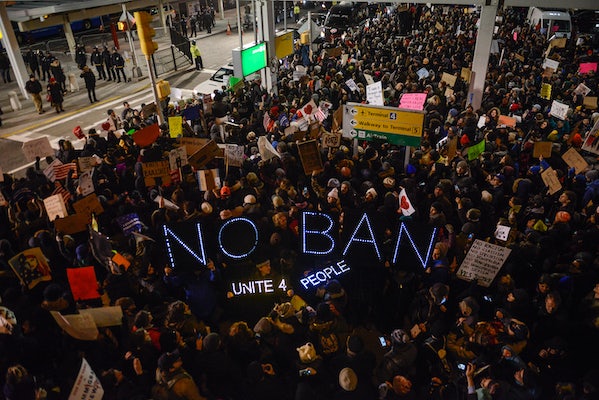 The Trump administration keeps undermining its own arguments for a travel ban.

Donald Trump was supposed to sign a revised executive order on immigration on Wednesday. This new and improved version of the travel ban would remove Iraq from the list of targeted countries (therefore allowing travel by Iraqis who have aided the United States) and permit legal permanent residents to re-enter the country, which was one of the many flaws of the original order.

But after Tuesday night’s well-received address to a joint session of Congress, the Trump administration decided to hold back the order.

Here, for instance, are some Trump tweets justifying the decision not to consult with key departments or foreign governments, and attacking the judges who ruled to block its implementation:

Reince Priebus defended the implementation of the order on Meet The Press by saying that it had to be done quickly: “This is all done for the protection of Americans. And waiting another three days and waiting another three weeks is something that we don’t want to get wrong. President Trump is not willing to get this wrong which is why he wants to move forward quickly and protect Americans.”

The argument, in other words, was that delaying the order could only lead to an increased terror threat. Trump and many others claimed (ridiculously) that the order had to be a surprise, because otherwise terrorists would enter the country in the period before it was implemented. But the Trump administration is now delaying an order because it doesn’t want to change the narrative away from “Donald Trump did something good.”