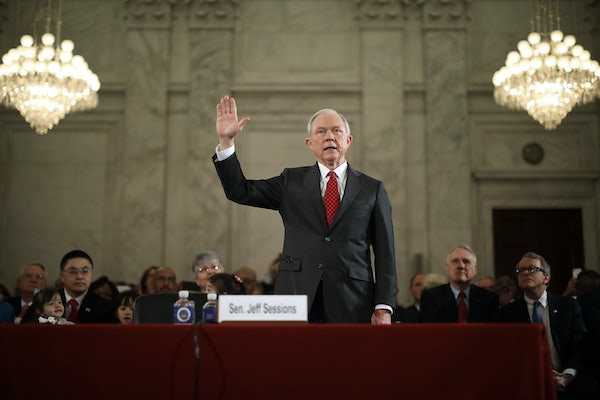 If Jeff Sessions were a Democrat, Republicans would be calling for a criminal probe.

And if he were still in the Senate, dealing with an attorney general who had lied under oath, you better believe he’d do more than demand that the attorney general recuse himself from an ongoing investigation.

To be fair, Democrats—including Elizabeth Warren, Nancy Pelosi, Elijah Cummings, and Joe Freaking Manchin—are calling on Sessions to resign as attorney general after The Washington Post revealed that he lied to Congress about contacts he had with the Russian ambassador during Donald Trump’s presidential campaign. But it’s clear that Democrats haven’t learned much from watching how Republicans treated the last two Democratic presidents. From Whitewater to Benghazi to Fast and Furious, Republicans tried to shoot the moon with every scandal or pseudo-scandal.

Democrats surely don’t want to destroy their credibility in the way that Republicans have. But in this case, calling for Sessions’s resignation is a bare minimum. That no one has yet to call for a criminal probe suggests that Democrats are still bringing knives to gun fights.

The demands for Sessions’s resignation have painted him into a corner. He now has to choose between appointing a special prosecutor and resigning, and it seems like that will be a pretty easy choice to make. That in itself is a significant victory for Democrats that could pay dividends down the line. Even Jason Chaffetz, who only a couple of weeks ago was behaving as if he had taken a blood oath to never investigate a Republican, is now calling for Sessions to recuse himself. Democrats could get more if they put the screws on.