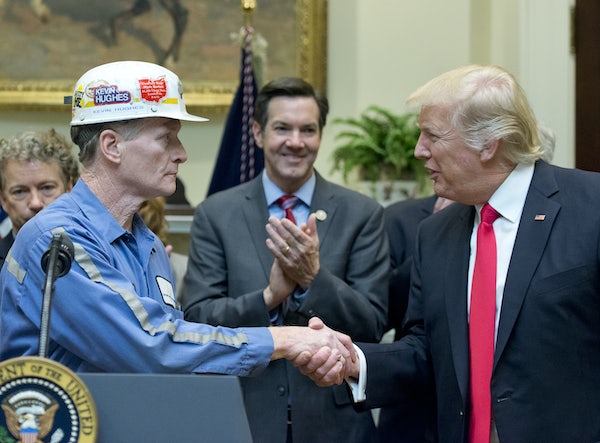 As many as 22,600 retired coal miners and miners’ widows received notice that their pensions and health care benefits will be cut off in 60 days, United Mineworkers for America reports. In a press release issued yesterday, UMWA President Cecil Roberts said it’s the third such notice that miners have received since October of last year, and urged Congress to vote on the Miners Protection Act, which would permanently protect their benefits:

Congress cannot keep kicking this can down the road. This is causing tremendous mental and in some cases physical trauma to these senior citizens. They will now have to begin contemplating whether to continue to get medicines and treatments they need to live or to buy groceries. They will now have to wonder if they can go see a doctor for chronic conditions like black lung or cancer or pay the mortgage.

The underfunded pension plan is another symptom of the industry’s general decline. As established in 1946, it’s a benefit pool supported by the contributions of mining companies. But as West Virginia Public Broadcasting notes, these contributions have vanished along with the companies themselves: They aren’t obligated to contribute if they’ve declared bankruptcy. The Miners Protection Act, introduced by Senator Joe Manchin (D?), would “reallocate money from the Abandoned Mine Lands Reclamation Fund” to shore up the failing plan. That’s a tough sell to a Republican-dominated Congress, and Manchin’s overtures to President Trump haven’t been enough to protect his constituents.

This is a matter of justice, and it should be a source of bipartisan consensus. Mining is dangerous, even deadly, work. In monoeconomies like central Appalachia, it’s also frequently the only work available. Miners did not create this monoeconomy and they should not be penalized for trying to survive it. If Congress allows the plan to fail, elderly men and women will suffer—and Democrats should be ready to point the finger at Republicans.