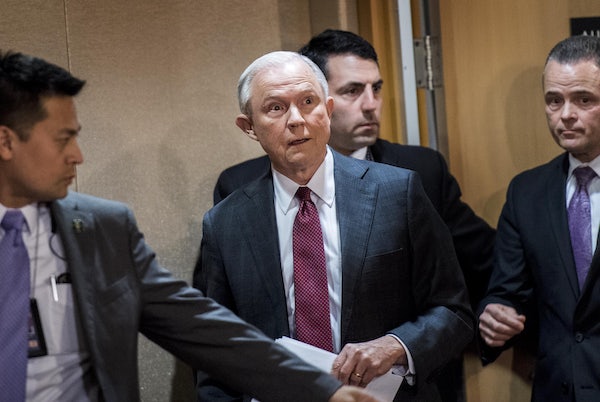 Donald Trump: It’s not weird at all that my entire campaign was talking to Russian officials.

Trump does not like to admit mistakes. Just this week, we saw the ugly side of that narcissistic trait when he blamed the military for the loss of a Navy SEAL in a botched raid in Yemen. This refusal to admit mistakes—combined with a stubborn and bewildering refusal to do self-oppo research—has only exacerbated the fallout from the scandal over the Trump campaign’s ties to the Russian government and/or intelligence agencies. On Thursday, a number of top Trump aides, including son-in-law Jared Kushner, admitted that they had met with the Russian ambassador over the course of the campaign. It’s hard to imagine, say, Mitt Romney’s team having this much contact with the Russian government. And yet we’re supposed to believe that this is entirely normal.

But that simply doesn’t track. If these contacts were totally innocent, then why lie about them? This is what Jeff Sessions did, to the point he almost lost his job. The desire to avoid the appearance of impropriety is the most charitable explanation, but the Trump administration of course won’t admit that. Instead, Trump is doubling down on his narrative: The Democrats are just mad and jealous because they lost the election.

It is obvious to anyone paying attention that the leaks are not the real story here. And, five months later, Trump is the only person still obsessing over the election result.