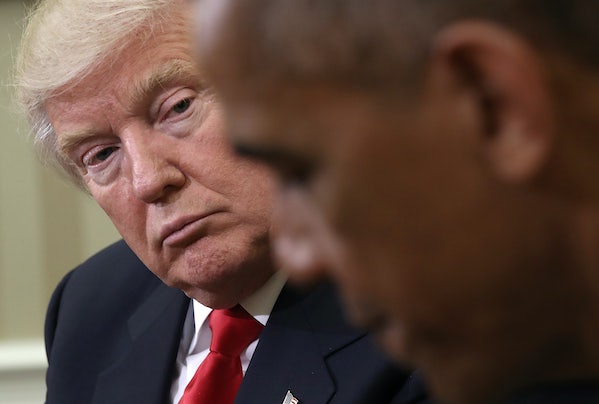 The president was furious over the weekend—about continued questions over his administration’s ties to Russia, that Attorney General Jeff Sessions recused himself from investigations into the same, and that the whole controversy overshadowed his widely (often unjustly) praised address to Congress last Tuesday.

But as The Washington Post reported late Sunday, something more fundamental was bothering the president as well: “Gnawing at Trump, according to one of his advisers, is the comparison between his early track record and that of Obama in 2009, when amid the Great Recession he enacted an economic stimulus bill and other big-ticket items.” In other words, Trump feels insecure that Obama got more done more quickly under more difficult circumstances.

As Politico put it, “Donald Trump just can’t quit Barack Obama.” On Saturday, Trump fired off unhinged tweets accusing his predecessor of tapping his phones in a “Nixon/Watergate”-style plot. This is just the latest twist in Trump’s strange relationship with Obama, the Post’s Aaron Blake notes. Trump heaped praise on Obama’s early presidency in 2009, then launched his birther crusade in 2011. That prompted Obama’s famed filleting of “the Donald” at the White House Correspondents’ Dinner in 2011—a devastating public humiliation that may have motivated Trump to run for president.

The two men duked it out last year, but after the election Trump insisted he and Obama liked each other. Obama, meanwhile, has avoided criticizing Trump directly, instead using coded language about not demonizing others. But Obama doesn’t have to say anything to drive Trump mad. In January, Trump was infuriated by media comparisons of their respective inaugural crowd sizes. As Trump’s tweets over the weekend show, he still feels taunted by Obama even though the former president has largely disappeared from the public stage.