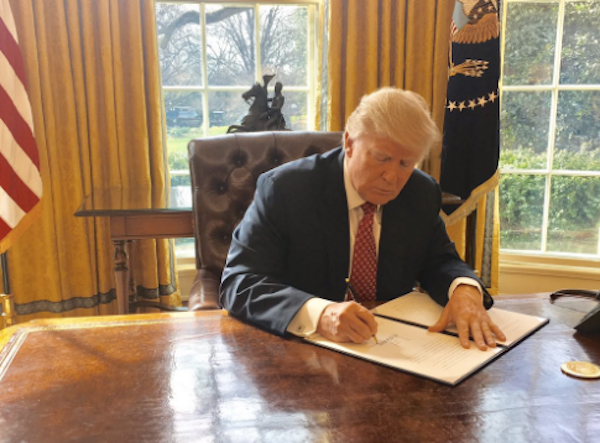 Meet the new Muslim ban, pretty much same as the old Muslim ban.

On Monday, Donald Trump signed a revised travel ban, more than a month after the original order was widely criticized for being inhumane, un-American, and incompetently executed (it was eventually frozen by a federal judge). Six, not seven countries are subjected to the new order—Iraq gets a break, in part because it had agreed to a “timely repatriation” of deported citizens and in part to avoid affecting Iraqis who had helped the United States military. Since 9/11 no fatal terror attacks have been committed by anyone from the six countries named in the order.

According to The Washington Post, the revised order also contains new exceptions “for travelers from those countries who are legal permanent residents of the United States, dual nationals who use a passport from another country and those who have been granted asylum or refu­gee status. Anyone who holds a visa now should be able to get into the country without any problems, though those whose visas expire will have to reapply.”

Unlike its predecessor, which was implemented immediately, the new order doesn’t go into effect for ten days. This is notable because the Trump administration largely defended the botched rollout of the previous order by insisting that the order had to be immediate or “bad dudes” would see an opening and rush into the country.

Unlike the previous order, which was issued without input from integral government departments—including the State Department—the new order was rolled out at a news conference featuring Attorney General Jeff Sessions, Secretary of State Rex Tillerson, and Director of Homeland Security John Kelly, none of whom took questions. The Trump administration has also included a fact sheet claiming that over 300 people who entered the U.S. as refugees are currently the subjects of FBI probes, but not which countries these people are from or any other useful contextual information.

This is the narrative the Trump administration is pushing: Last time the order was executed poorly and this time it’s being executed the right way. But the problem with the previous executive order wasn’t just with the rollout, although the rollout was very bad indeed. The problem was that it had questionable constitutional merit and that it was counterproductive. This is still a Muslim ban and no rollout can stop the protests and court challenges that will follow.