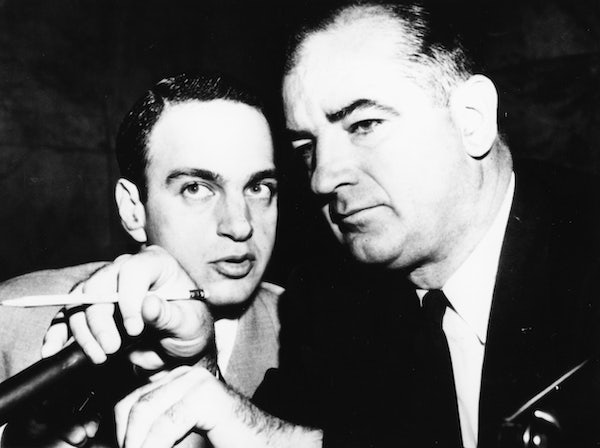 The Trump administration was for McCarthyism until it was against it.

On Saturday morning, President Trump tweeted, “Terrible! Just found out that Obama had my ‘wires tapped’ in Trump Tower just before the victory. Nothing found. This is McCarthyism!” Trump’s evocation of McCarthy was ironic given that his most important mentor was Roy Cohn, McCarthy’s right-hand man. But these remarks take on an even larger element of absurdity when you consider that Trump’s eminence grise, Steve Bannon, is on record as not only admiring McCarthy, but also wanting a new McCarthyism targeting Islam.

As reported by CNN, in a 2013 interview with the conservative pundit Diane West, Bannon praised McCarthy and saw parallels between McCarthyism and Bannon’s own desire to root alleged Muslim Brotherhood sympathizers out of the government.

Today in modern pop culture, you know they call Ted Cruz the Joe McCarthy. If you want to think of who devils are it’s Ronald Reagan and those who name names at the House Un-American Activities, the Hollywood Ten are heroes right? ...

Joe McCarthy is a villain. Your book makes very plain that these guys were right. The place was infested with either traitors that were on the direct payroll of Soviet military intelligence or fellow-travellers who were kind of compliant in helping these guys get along.

The Trump team’s position seems to be that imaginary McCarthyism (the alleged plots against Trump) is bad, but real McCarthyism is admirable and worth emulating.