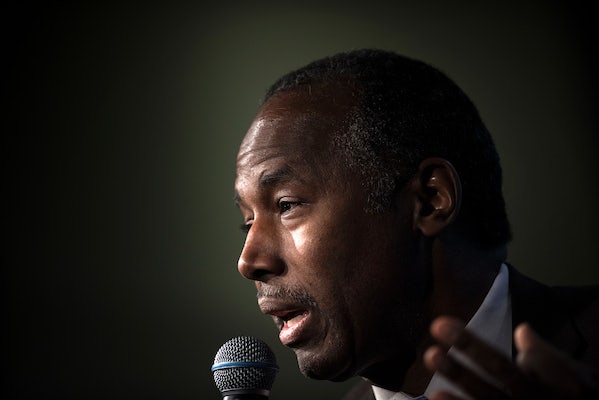 Ben Carson thinks slaves were immigrants who came to America in search of a better life.

The new Housing and Urban Development secretary was speaking to his employees in Washington, D.C., on Monday, about America as a “land of dreams and opportunity” when he added this: “There were other immigrants who came here in the bottom of slave ships, worked even harder, even longer for less. But they too had a dream that one days their sons, daughters, grandsons, granddaughters, great grandsons, great granddaughters might pursue prosperity and happiness in this land.”

That Carson apparently sees no difference between voluntary immigration and enslaved men and women being brought to toil in America against their will should be shocking. But the world-renowned neurosurgeon has lots of weird ideas about slavery: that women who receive abortions are like slaveholders, for instance, and Obamacare is “the worst thing that has happened in this nation since slavery.”

This is yet another head-scratching comment from Carson that proves you can be brilliant in one specific discipline (neurosurgery) and woefully ignorant in general.