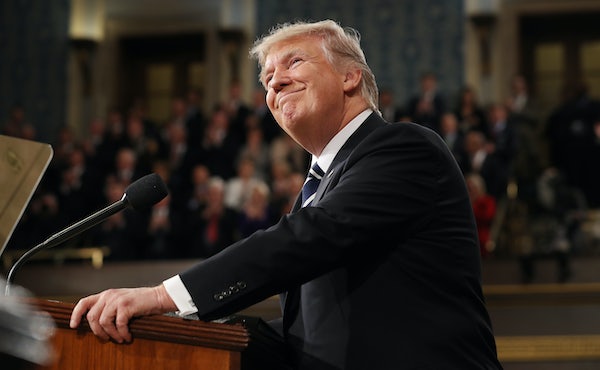 What is The Fix’s problem with calling Donald Trump a liar?

Amber Phillips, a member of The Washington Post’s The Fix, is very irate with Bernie Sanders. And who can blame her? Sanders believes all kinds of insane things, like that people deserve a living wage and that health care is a right—oh, and that Donald Trump is a liar:

This shocked Phillips, who managed to release her pearls long enough to write a blog post:

A prominent U.S. senator just described the president of the United States as a frequent and “shameless” liar. What’s more, what Sanders said about President Trump is one of a bazillion criticisms that Democrats have lobbed and will lob at the president this week alone.

Phillips claims it may be inaccurate to call Trump a liar because it’s possible he believes what he’s saying. “That’s why we in the media are careful not to call Trump a ‘liar,’” she writes. This is not something to brag about! Journalists have a responsibility to call out Trump’s lies and report the truth, which is what Phillips’s colleagues at the Post have done. It is what reporters at The New York Times have done. If the president is lying, he needs to be called out.

Phillips also suggests that, in calling Trump a liar to his face, Democrats are just as guilty as Trump of eroding political norms. She says this after citing the fact that Trump’s assertions that Barack Obama tapped his phones are based on conspiracy theories from “a conservative news site one of his top aides used to manage.” (That would be Steve Bannon’s Breitbart.) To imply Democrats are working in concert with white nationalists to weaken norms collapses the difference between the two.

Trump is a liar. He lies in specific, dangerous ways, and it is entirely appropriate for the opposition party—and the news media—to provide an honest rebuttal to the agitprop he spits.