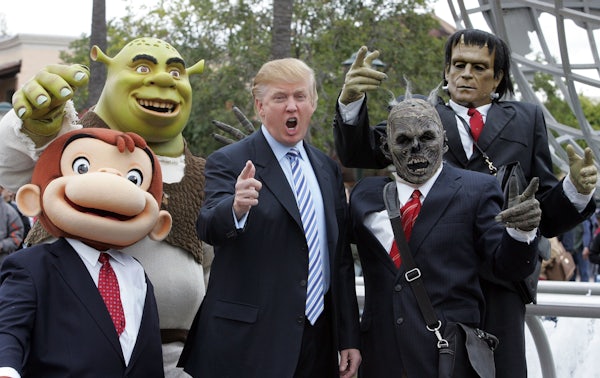 Donald Trump is already throwing the GOP’s Obamacare replacement under the bus.

There was little fanfare when the House GOP on Monday night dropped the American Health Care Act, access to which previously required the curious to answer three riddles (the answers: Reagan, “Cadillax tax,” Katherine Heigl) to see its fabulous contents (repealed mandates, health-savings accounts, the gutting of Medicaid). Instead, the bill simply leaked to major news outlets. The next morning investigative woodland creature Jason Chaffetz went on television to promote the bill, and quickly gave the game away:

The subtext here is barely subtext. Health care is unaffordable for many poorer families not because it is extremely expensive because insurance companies are ripping them off, but because poor people are not good at financial management. In other words, it’s not our fault that you can’t afford health insurance! That, of course, is a great place to start when promoting a bill that supposedly makes health insurance more affordable.

But Chaffetz will have time to perfect his pitchman act, because the contents of the bill are already up in the air. The morning after the bill was released, the President of the United States weighed in by livetweeting Fox & Friends.

This is a remarkable response to what could very well be the signature legislative accomplishment of his first term. The key word here is “negotiation.” Trump is talking about negotiating with two audiences, both of which should have House Republicans scared. The first is Democrats and (to a lesser extent) Senate Republicans, who will likely push to make this bill less draconian. The second is Trump himself: specifically, Trump’s numerous promises on the stump about bringing costs down and increasing coverage, which are clearly not met by this bill.

After not being involved in the draft process—he could have been, but wasn’t—Trump has decided to weigh in on a draft bill by telling everyone that it’s a work-in-progress that doesn’t yet have his full approval. Later in the morning he made another comment, but this time, at least, he seemed to be on message—Paul Ryan’s spokesman confirmed that there will be a phased repeal of Obamacare.

The biggest problem right now is that the AHCA is essentially a tax cut bill disguised as a health care bill. It solves no problems, creates many, and does not seem to exist for any coherent reason except “cutting regulations and rich people’s taxes.” Any negotiation—even with Donald Trump himself—will show the bill’s stripes, which is why House Republicans should be terrified about the president’s tardy interest in their work.