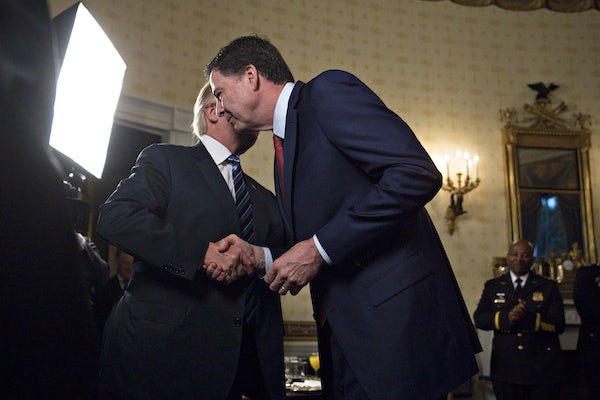 James Comey is “incredulous” about the ravings of the guy he handed the presidency to.

The FBI director was reportedly flabbergasted when President Trump alleged that Barack Obama had ordered Trump’s “wires tapped” in the weeks before the election, and is restlessly waiting for the Department of Justice to refute Trump’s claims.

One course of action Comey might consider is refuting Trump himself, with a reminder that the FBI spent most of October not wiretapping Trump, but investigating and leaking about Hillary Clinton, before Comey himself landed her campaign a fatal blow, and handed his new tormentor the presidency.

This chart comes from Brad Fay of Engagement Labs, who says Comey’s infamous letter to Congress announcing the FBI had uncovered a new cache Clinton emails, (which turned out to be nothing, but could have been the smoking gun which proved she did Benghazi) was decisive in the election.

[T]here was a sudden change in the net sentiment results that followed immediately after FBI Director James Comey released his Oct. 28 letter to Congress about a renewed investigation of Clinton emails. Immediately afterwards, there was a 17-point drop in net sentiment for Clinton, and an 11-point rise for Trump, enough for the two candidates to switch places in the rankings, with Clinton in more negative territory than Trump. At a time when opinion polling showed perhaps a 2-point decline in the margin for Clinton, this conversation data suggests a 28-point change in the word of mouth “standings.” The change in word of mouth favorability metric was stunning, and much greater than the traditional opinion polling revealed.﻿ Based on this finding, it is our conclusion that the Comey letter, 11 days before the election, was the precipitating event behind Clinton’s loss, despite the letter being effectively retracted less than a week later.

Comey can’t unfoul this bed. But when his Trump-Russian inquiries have run their course he owes the world an accounting. Just for starters.