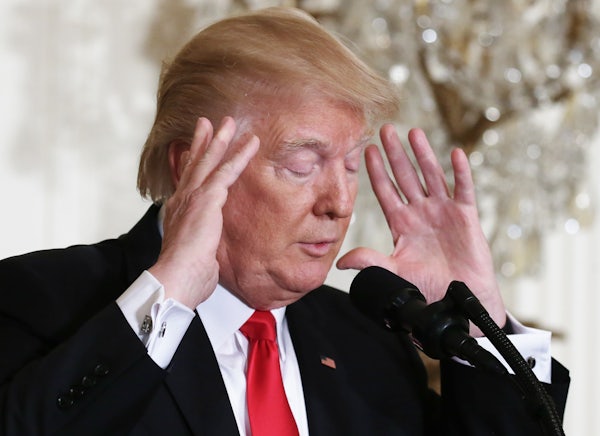 The WikiLeaks CIA dump is quickly turning into a conspiracy theory: The CIA did the hacks!

If this were a normal time—if a crazy person weren’t president of the United States—the Wikileaks document dump would be the biggest story in the country right now. The documents, which were published on Tuesday, are part of the largest leak in CIA history and detail the agency’s techniques for breaking into cell phones, computers, and televisions. According to The New York Times:

The initial release, which WikiLeaks said was only the first installment in a larger collection of secret C.I.A. material, included 7,818 web pages with 943 attachments, many of them partly redacted by WikiLeaks editors to avoid disclosing the actual code for cyberweapons. The entire archive of C.I.A. material consists of several hundred million lines of computer code, the group claimed.

In one revelation that may especially trouble the tech world if confirmed, WikiLeaks said that the C.I.A. and allied intelligence services have managed to compromise both Apple and Android smartphones, allowing their officers to bypass the encryption on popular services such as Signal, WhatsApp and Telegram. According to WikiLeaks, government hackers can penetrate smartphones and collect “audio and message traffic before encryption is applied.”

The leaks have been described as being “Snowden 2.0” and “bigger than Snowden.” Ordinarily you’d expect blanket condemnation from the commander-in-chief, but Trump is not an ordinary commander-in-chief. There are two reasons why he may be holding his tongue.

The first is that the leak largely tracks with his argument that the intelligence agencies are bad and should not be trusted. Trump believes this not because he’s opposed to surveillance per se, but because he is furious about leaks to the press that he believes have come from the intelligence agencies. It’s not farfetched to imagine Trump tweeting: “Don’t believe that CIA is leaking all this FAKE NEWS about me? They broke into your phones and TVs!”

The second would be preposterous for any president who wasn’t Trump. But Wikileaks has also alleged that among the programs used by the CIA is one called “Umbrage.” Umbrage supposedly “collects and maintains a substantial library of attack techniques ‘stolen’ from malware produced in other states including the Russian Federation,” WikiLeaks says. With this program, the CIA can conduct hacks itself, while making it look like they were conducted by Russia and others.

This is a mischaracterization of the program and the malware used to hack the Democratic National Committee isn’t included. But you can see where this is going. The story is already on the front page of Brietbart and the message is clear. It wasn’t Russia that hacked the DNC and John Podesta, it was the CIA—who did it to blame Russia and discredit Trump. This is incredibly convoluted. For one, why would they do this? But it’s going to be trotted out as evidence by every conspiracy-leaning Putin and Trump apologist out there—and no one is a bigger conspiracy-leaning Putin and Trump apologist than Trump himself.