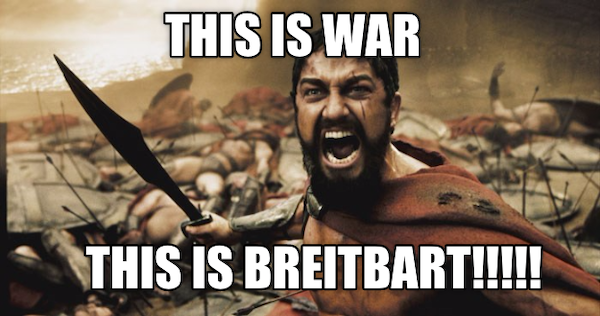 Breitbart now has a leak problem, too.

Journalists have reaped the benefit of constant leaks coming out of the White House and the administration—dozens of sources, damning disclosures, colorful quotes. But Wednesday revealed that President Donald Trump’s biggest boosters in the media appear to have at least one leaker in their midst as well. Business Insider’s Oliver Darcy obtained a screenshot from an internal Breitbart chatroom in which Washington editor Matthew Boyle talks about a recent story criticizing the administration.

“We are Breitbart,” Boyle wrote in the Slack room. “This is war. There are no sacred cows in war.”

Darcy was also sourced on Boyle’s frustration with former Breitbart CEO Steve Bannon, now Trump’s chief strategist, who unloaded on Boyle when the outlet published pieces critical of White House chief of staff Reince Priebus. Darcy says Bannon told Boyle “not to publish additional articles critical of Priebus, prompting the Washington editor to tell others that Bannon had betrayed Breitbart and was guilty of ‘treason,’ according to a source.”

In these times of war, one can only wonder how General Boyle will punish the traitor within his ranks.