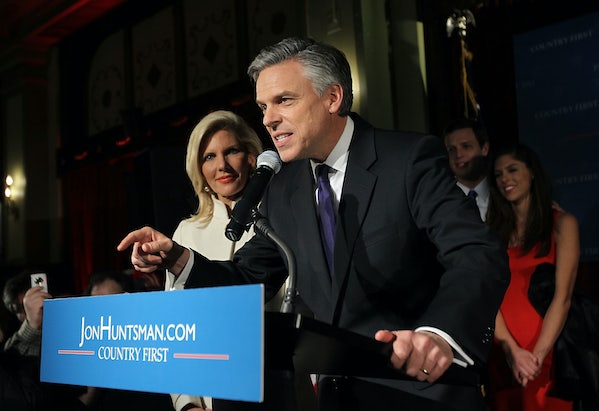 At this point, we should no longer be surprised when politicians of purported integrity come running to join Donald Trump’s administration, even those, like Huntsman, who called on Trump to drop out of the 2016 race after it emerged that the then-candidate had boasted about sexually assaulting women. For Republicans with ambition—and Huntsman might be unsurpassed in this category—the Trump White House is the only game in town. Thus, the news that he has agreed to become Trump’s ambassador to Russia has so far been met with indifference. If eyebrows were raised, it was to acknowledge that Trump had, in uncharacteristic fashion, appointed not only a qualified person to this sensitive government position, but also a former opponent who had publicly tangled with him in the past.

You may recall that Huntsman ran for president in the 2012 Republican primary, as a lonely centrist who had previously served as the ambassador to China for the loathed Barack Obama (he had also been a popular governor of Utah). His clashes with Trump, in hindsight, augured the gale force winds that would blow the GOP’s house down four years later. Trump, then best known as the country’s leading birther, demanded that Huntsman meet him at Trump Tower. Huntsman refused, declaring, “I’m not going to kiss his ring, and I’m not going to kiss any other part of his anatomy.” A wounded and enraged Trump, previewing the petty vindictiveness that would characterize his 2016 run and his young presidency, lashed out, claiming that it was Huntsman who had requested the meeting, not him. “He’s a Mormon, so I’m sure he wouldn’t lie about it,” he sneered, one of several digs he made at Huntsman’s religion.

Mitt Romney, the eventual 2012 GOP nominee, did kiss the Trump ring. Huntsman gained no traction at all with Republican voters, and quickly dropped out of the race. The Huntsman name faded from view until after the election, when it emerged that Huntsman’s father, a stupendously wealthy power-broker in Utah and Mormon political circles, had been the source of Harry Reid’s unsubstantiated yet damaging claims that Romney had paid no income taxes for a decade. (Huntsman Sr. denied the report, though he had previously said, “I feel very badly that Mitt won’t release his taxes and won’t be fair with the American people.”)

In 2013, Huntsman was named one of the leaders of No Labels, a centrist group that presents itself as dedicated to non-ideological problem-solving, but is really a vehicle for those hoary, unempirical obsessions of the Beltway elite, entitlement reform and a balanced budget. It, too, has failed to gain much in the way of popular support, but the sinecure at least allowed Huntsman to burnish his reputation as a centrist. This would presumably serve him well in his new goal: becoming secretary of state. He (reportedly) would have been happy serving as secretary of state for Donald Trump or Hillary Clinton, who he assumed, as everybody else did, was going to win the 2016 election. Hence his initial support for Trump, then his call for Trump to drop out of the race following the release of the infamous Hollywood Access tape, now his return to Trump.