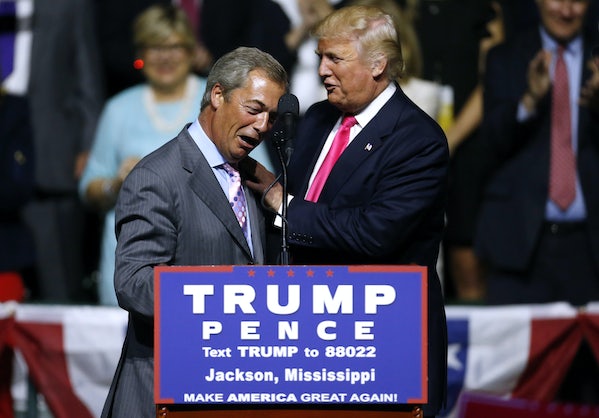 Nigel Farage suggests there are many reasons to visit the Ecuadorian embassy in London besides seeing Julian Assange.

The former head of the U.K. Independence Party spent 40 minutes there yesterday. The most famous resident of the embassy is, of course, the WikiLeaks founder, who permanently resides there to avoid extradition to Sweden to face an outstanding rape accusation. Did Farage visit Assange at the embassy? Asked by BuzzFeed as he was leaving, Farage initially said he couldn’t remember what he did during his visit. Pressed about Assange, Farage said, “I never discuss where I go or who I see.”

The possible meeting between Farage and Assange raises all sorts of questions relating to the last election in the United States. WikiLeaks published a vast trove of hacked emails from the Hillary Clinton campaign. Farage is Donald Trump’s politically ally, hanging out with the president on numerous occasions over the last year, including recently at Trump’s hotel in D.C. Trump and Assange have also been allies over the issue of whether Russia had been behind the hacked emails. Was Farage acting as a liaison between Trump and Assange? And if so, how long has this been going on? It’s hard not to get conspiratorial when the same three guys keep bumping into each other.

Or maybe it’s simply that the notoriously xenophobic Farage has developed a sudden interest in Ecuadorian culture.