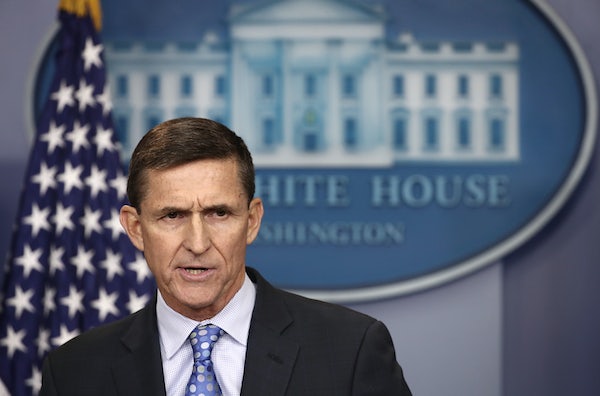 The real pay-to-play scandal of the 2016 race was in Trump’s campaign.

Apparently under pressure from the Justice Department, former National Security Adviser Michael Flynn has officially registered as a foreign agent for the Turkish government. According to the Associated Press, Flynn’s company Flynn Intel received $530,000 from Turkey last year for his lobbying efforts, which included trying to stir up opposition in Washington to Fethullah Gulen, the exiled nemesis of Turkish President Recep Tayyip Erdogan. As the AP reports:

Flynn Intel arranged the meeting to discuss a technology developed by another Flynn Intel client. But after discussing the technology, the firm changed the subject to Gulen, pressuring the committee to hold congressional hearings to investigate the cleric, said a U.S. official with direct knowledge of Flynn Intel’s work. That request was rebuffed. The official spoke on the condition of anonymity because the official was not authorized to discuss the matter publicly.

The official said Flynn Intel never revealed whom it was representing during the meeting.

The October meeting came as Flynn was working on an op-ed promoting Turkey’s political and business affairs that was later published in The Hill, a Washington-based political newspaper. Flynn wrote that Turkey needed support and echoed Erdogan’s warnings about Gulen, whom he called a “shady” Turkish Muslim cleric living in Pennsylvania. Flynn argued that Gulen should not be given safe harbor in the U.S.

All these activities occurred while Flynn was working as an adviser to Trump, either as a presidential candidate or president-elect. During the election, Trump criticized his rival Hillary Clinton for alleged pay-to-play deals with foreign governments, citing her ties to the Clinton Foundation. But the Flynn case shows that a far more straightforward pay-to-play scandal was occurring closer to home.