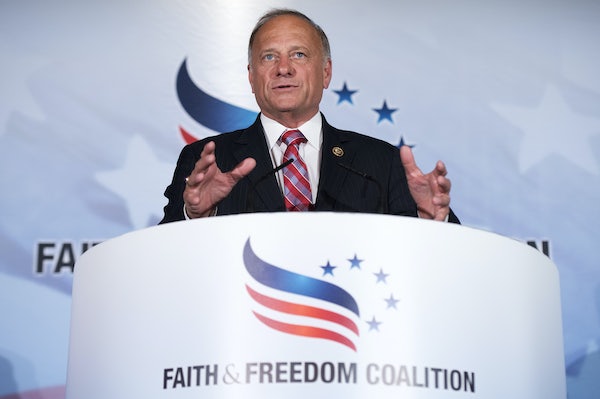 King’s been edging for that title for years, but on Sunday the Republican pulled ahead of his fellow party members with a tweet that channeled the racist aviator Charles Lindbergh:

Geert Wilders is a far-right Dutch politician who’s called for the Netherlands to ban the Quran, close mosques, and end Muslim migration; his Freedom Party is angling to win a national election this week. And this is not the first time that King, an early and enthusiastic supporter of Donald Trump, has expressed support for Wilders and his extreme xenophobia. From Politico, this February:

“I have sent those messages to the[Trump] inner circle and encouraged that they communicate with Mr. Wilders,” Congressman Steve King, an Iowa Republican, told Politico in a phone interview. “It’s important for the Trump administration and for this White House team to be engaged in an effort to restore Western civilization.”

King also tweeted a photo of himself with Wilders and Frauke Petry, head of Germany’s far-right Alternative for Germany Party, last September:

Petry, like Wilders, opposes Muslim migration to Germany, claiming Muslims seek to impose Shariah on Germany’s Christian inhabitants. King is prone to the same claim. “They bring with them Sharia law, which is completely contradictory to the Constitution itself. It’s incompatible with the Americanism,” he told Chris Hayes in 2015. His tweet simply develops his definition of “Americanism” as a specifically Judeo-Christian nationalist identity.

King’s “Americanism” and his ties to Europe’s far-right inescapably invoke parallels to Charles Lindbergh, who deployed similar rhetoric about “western civilization” and national identity to defend his opposition to American participation in World War II:

While I advocate the non-interference by America in the internal affairs of Europe, I believe it is of the utmost importance for us to cooperate with Europe in our relationships with the other peoples of the earth. It is only by cooperation that we can maintain the supremacy of our western civilization and the right of our commerce to proceed unmolested throughout the world.

Lindbergh eventually acted as spokesman for the America First Committee, promoting xenophobia and his isolationism. Trump, of course, adopted the same slogan during his campaign last year.