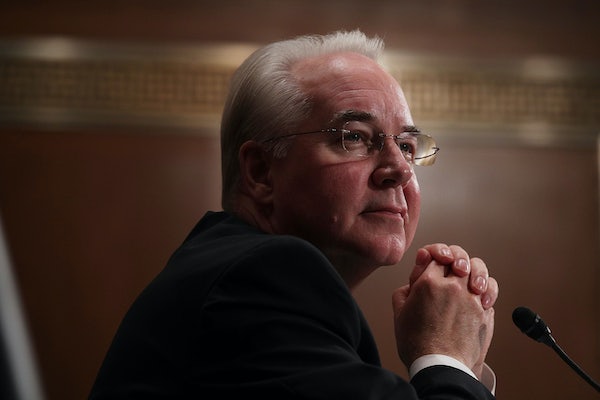 Tom Price: Republicans will use right-wing hackwork to pretend Trumpcare won’t take insurance away from millions.

Critics have rightly noted that Health and Human Services Secretary Tom Price lied on Meet the Press Sunday when he predicted “nobody will be worse off financially” under the American Health Care Act. This and other comments from leading Obamacare-repeal architects will haunt them for years if they somehow pass AHCA into law.

But Republicans have been making false promises about health care reform for years. The newsier tipoff from Price was that Republicans are going to promulgate their health care lies with dishonest right wing think tank analysis projecting that AHCA will cover more people than currently have insurance under the ACA.

“I think we’ll have folks that are evaluating this and modeling this come out and say, ‘yes, indeed, this plan will in fact cover more individuals than are currently covered,’” Price told NBC’s Chuck Todd.

This is part and parcel of the GOP’s preemptive effort to discredit the Congressional Budget Office, which is expected to score AHCA as a humanitarian catastrophe. But, to be clear, it is bullshit. Credible analysts, on both the left and the right, project that AHCA will cause millions of people to lose their insurance. The only question is how many millions. Republicans in Congress want to paper over an ongoing and growing public relations fiasco with the health care equivalent of voodoo economics. Consider yourselves warned.